Bishop Auckland pub customers bare all in memory of pal

A FANCY dress party, a charity fundraising event and a cheeky calendar proved to be the perfect way for pub customers to pay tribute to a late friend.

One year after John Dodds, from West Auckland, in County Durham, lost his battle with cancer his pals at a village watering hole have raised close to £2,000 in his memory.

Fourteen of Mr Dodds' friends stripped off to produce a nude – but entirely tasteful – calender.

And on Saturday his local, The Blacksmiths Arms at Spring Gardens, hosted a charity night in aid of Macmillan Cancer Support, having already held a fancy dress party on what would have been his birthday.

Landlord Chris Wilkinson, who organised the event with wife Debbie and customer Stephen Wallace, said: "John was one of the most loved customers in this pub, he was just a character in himself and he really is missed.

"He loved a charity night or fancy dress so that's how we've remembered him.

"The calendar idea came up and they all jumped on the bandwagon after a couple of pints, before we knew it 14 of us had agreed to do it. We all know John would have been first in the queue if he was still here.

"We've got builders, a crane operator, pub manager and we've gone for professional poses, but obviously not everyone can have pictures like that taken at work so some were done at home.

"It was a good laugh and we're selling the calendars in the pub and they'll go online."

Regulars agreed to strip off for a cheeky charity calendar, left

Just one of 14 friends who made the calendar 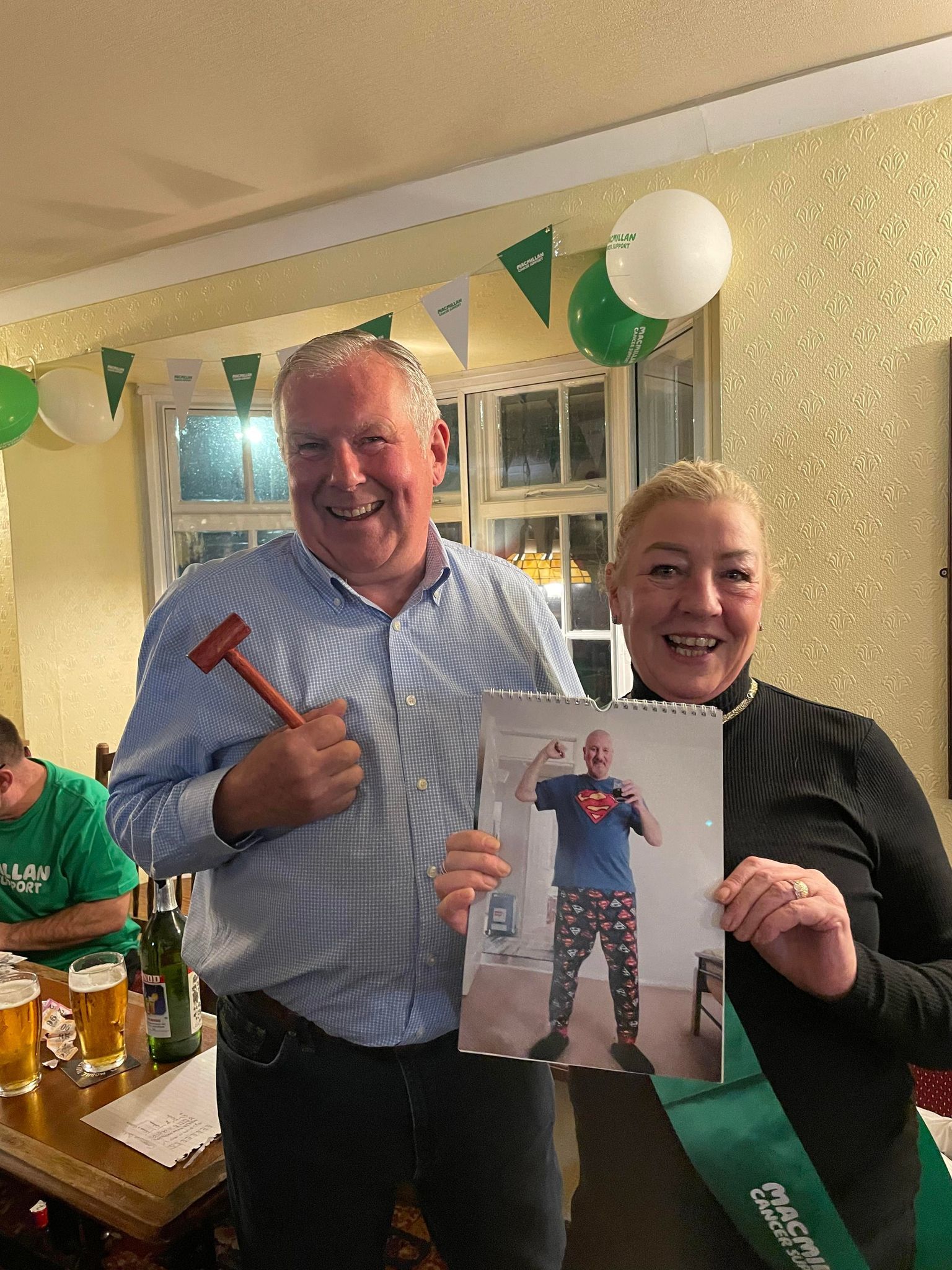 Regulars at The Blacksmiths Arms, Spring Gardens, near Bishop Auckland, held a charity night in memory of friend John Dodds

Mr Dodds was diagnosed with lung cancer in late 2017 and told he probably had just months to live.

Yet he underwent treatment to buy himself more time with his family – daughter Jodi Glendenning, son Jordan and grandchildren Grace, Lincoln and Justin - and managed to live more than two years.

The coronavirus pandemic delayed part of his treatment and he went on to catch and survive Covid, but his health deteriorated and he passed away last November.

John Dodds was a dad-of-two with three grandchildren

John Dodds was a father-of-two and grandfather of three

Mrs Glendenning said: "Dad lived in West Auckland all his life, worked at the Scandura factory for 20 years, had various jobs and was a school crossing patrol around County Durham.

"He was just a popular guy, who loved his family and his mates at The Blacksmiths and who to raise money for we said Macmillan, they were a big support for dad but more so for us, they were always on the end of the phone for me and my brother.

"I think is lovely what they've done and we're really grateful not just about the fundraiser but to know they're having fun, remembering dad."

Right, John Dodds, of West Auckland, who died of cancer in November, 2020

John Dodds loved to have a laugh at the pub

Mr Wilkinson added: "You couldn't find a nicer, kinder bunch of people than in this pub.

"When we started this we hoped to raise a couple of hundred pounds, we had lots of donations for a raffle, tombola and auction and a great charity night.

Woman's 'skin crawls when touched' after being raped when seeking refuge

New 'stealth Omicron' strain - symptoms and why it's 'under investigation'

Pub of the Year: Hunt is on to find Ayrshire's favourite local — and we need your help

ADVERTORIAL: Young people can get free bus travel across Scotland, here's how