Biden: 'We cannot let people go hungry. That is not who we are'

Joe Biden has signed a series of executive orders aimed at assisting families and workers amid the economic crisis spurred by the coronavirus pandemic.

The new US president put into law two orders in line with his vow to make “bold steps to address the inequities in our economy and provide relief” to those struggling. He called the nation’s hunger crisis “unconscionable”.

It comes as the House prepares to deliver an impeachment measure charging former president Donald Trump with inciting insurrection to the Senate on Monday.

The move, announced by Senate majority leader Chuck Schumer on Friday, signals the start of a trial process that could ban him from holding office again.

Mr Schumer agreed with a request from Senator Mitch McConnell to push back the start of the trial and it will give Joe Biden more time to get his cabinet nominees approved.

The former president was impeached in the House by Democrats and 10 Republicans, but it will take a two-third majority in the Senate to convict him. 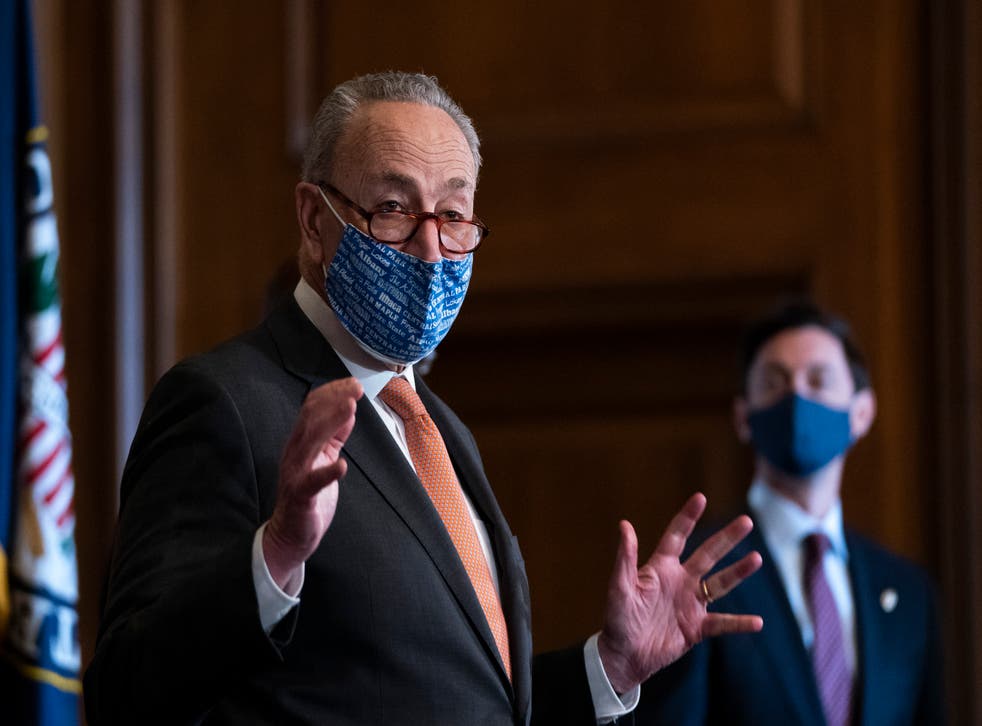 One of Mr Biden’s first acts in office was signing an executive order to recommit the US to the global climate pact, to cut the greenhouse gas emissions heating the planet.

‘I work for the people of Pueblo, not the people of Paris,’ Rep Boebert tweeted. The climate agreement was so named because it was signed in the French capital - and not because it solely benefits the city’s residents

New administration has plans to expand reproductive rights, but could face fights in Congress and at the conservative Supreme Court, reports Josh Marcus.

New administration has plans to expand reproductive rights, but could face fights in Congress and at the conservative Supreme Court

What happens next with the Trump impeachment?

The Independent’s Justin Vallejo explains what the next steps are in the second impeachment of (now former) President Donald Trump.

Joking about the Biden administration’s 198-page pandemic plan, late-night host Jimmy Fallon quipped: “It might look boring to you, but for Dr Fauci, that’s Fifty Shades of Grey.”

US Embassy in London: It’s ‘just a bust’

The American embassy in London tweeted a video saying that the sculpture of Winston Churchill was "just a bust", after it disappeared from the Oval Office as President Biden moved in and the White House went through a makeover.

Gustaf Kilander reports for The Independent.

First Lady Jill Biden made a surprise trip to visit the National Guard troops stationed at the US Capitol on Friday so she could deliver them cookies made from the White House.

The stop was not on Dr Biden’s official schedule, but it was made in an effort to show her gratitude towards the troops for protecting Washington DC around Inauguration Day, specifically after reports surfaced of some members being forced to sleep in a parking garage.

Danielle Zoellner reports for The Independent.

"The National Guard always holds a special place in the hearts of all the Bidens. So thank you,” Dr Biden says

In case you’re wondering, the appropriate anniversary gift from the modern list is silver holloware for the table, such as sugar bowls, teapots, water jugs etc.

Senior  Republicans in Washington have been quietly lobbying GOP lawmakers to impeach and convict Donald Trump, a report says.

The effort against the former president, which includes former top Trump administration officials, started in the wake of the 6 January attack on Congress, according to CNN.