President Joe Biden has reportedly selected his longtime doctor to serve as the White House physician, replacing the controversial official accused of misleading the American public about Donald Trump’s condition after the former president contracted Covid-19.

Dr Kevin O’Connor, the retired US Army colonel who served as Mr Biden’s physician during his tenure as vice president, has been tasked with the new president’s medical care, according to CNN.

The appointment would force Dr Sean Conley’s removal from the position. The doctor, a Trump appointee, received criticism last year for suggesting the former president was doing “very well” after he was diagnosed with Covid-19, when in fact reports indicated he had received supplemental oxygen and was experiencing side effects associated with the disease caused by the novel virus.

While it is not uncommon for new presidents to replace former White House physicians shortly after their inaugurations, as CNN reported on Monday, many incumbent doctors have also stayed on the job through the transition of power and into the following administration.

However, the writing was on the wall for Dr Conley after he received a wave of backlash for misleading comments he made at a press briefing outside of the Walter Reed Medical Center in October, when he skirted around questions about reports suggesting Mr Trump was receiving oxygen. 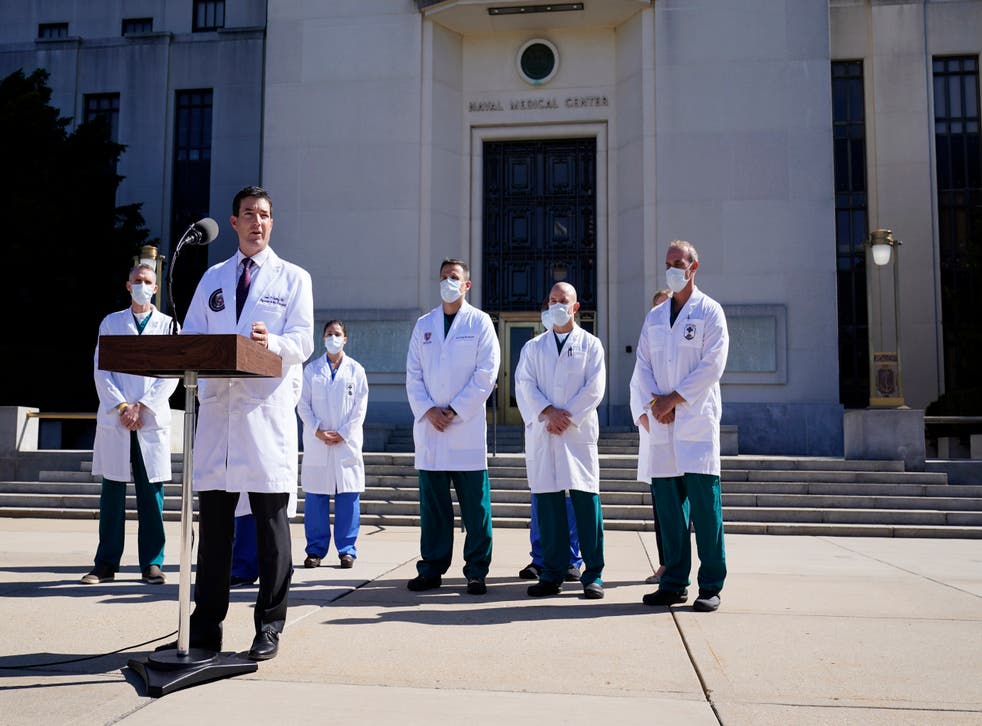 ‘This morning, the president is doing very well’ says his physician Dr Sean Conley on Saturday

He said the former president was “not on oxygen right now” while repeatedly avoiding questions as to whether or not Mr Trump had received oxygen at any point — a clear discrepancy that he was forced to acknowledge the very next day, after it became clear Mr Trump suffered more intense conditions due to the virus.

“I was trying to reflect the upbeat attitude that the team, the president, that his course of illness has had,” he said at the time. “I didn’t want to give any information that might steer the course of illness in another direction.”

According to CNN, Dr Conley was seen departing the White House with Mr Trump on his final day as president.

The White House has not yet provided a statement about the appointment of Dr O’Connor, and did not respond to a request for comment. However, the doctor has recently presided over the president’s health and gave him a full exam as he was running for office.

Dr O’Connor described Mr Biden — the oldest president ever inaugurated — as "a healthy, vigorous, 77-year-old male, who is fit to successfully execute the duties of the presidency" in a 2019 physical.

Mr Biden addressed his age and health along the campaign trail, telling supporters at a 2019 event in Iowa: “Look, it’s a legitimate thing to be concerned about my age. Just like it was a legitimate concern when I was 29 whether I had the judgment to be a US Senator. I think it’s totally legitimate. The only thing I can say is watch, watch. Check my energy level, determine whether I know what I’m talking about.”

Dr O’Connor will travel with Mr Biden and oversee the first family’s health, along with the White House Medical Unit staff.

Man City have not lost in 27 consecutive games. Best streak since 2017
Guardiola has 200 wins in 273 games at the helm of Man City. Mourinho has so many wins in 309 games with Chelsea
Paul Pogba: We need to help people. Today I'm Paul Pogba, tomorrow I'm nobody. You need to use influence
De Bruyne came in 10th in the history of the Premier League in the number of assists - 77. The leading Giggs - 162
Willian: I really wanted to stay at Chelsea. Leaving for Arsenal is a difficult decision, there is a serious rivalry between the clubs
Kane will not leave Tottenham this summer. Clubs do not have the money for such large deals
Antonio Conte: The fans of our rivals said that Conte should be kicked out of Inter. It would help them
Source https://www.independent.co.uk/news/world/americas/us-politics/biden-trump-doctor-sean-conley-kevin-oconnor-b1792437.html

One to watch: Katy Kirby

Latest figures prove Teesside not left behind in vaccine rollout

Man Utd must pay Cavani £1.75m to get rid of him this summer and will wait until he’s fit to make transfer decision

Rossendale: Warning after vans in Haslingden and Acre targeted by thieves

Investigation launched after shots are fired in Sale

Body found in river amid search for missing Scots pensioner

Six Nations 2021 fixtures, results and table: Wales vs England, France vs Scotland OFF this weekend, Ireland in Italy

Woman, 40, grabbed and sexually assaulted by man on footpath in Gateshead near Aldi