Andrew Neil says purpose of new government is ‘not clear’

Andrew Neil made a surprise return to the BBC when he appeared on Question Time and was interrogated by Fiona Bruce over why he chose to step down as lead presenter and chairman on Monday. Mr Neil delivered a vague answer which he invited viewers to "make up their own minds" over whether he left the channel due to its right-wing leanings before stating his vision for the channel left him in a "minority of one" scenario. Ms Bruce continually pushed Mr Neil for specifics with Spectator chairman adding stark differences began to emerge between him and his team.

Mr Neil left GB News on Monday just only three months into the launch of the channel after rumours circulated he fell out with higher-ups.

The former BBC journalist noted the launch of the channel was marred with issues and told Question Time it was not a startling success.

In response to his departure, GB News said: "Andrew is without doubt one of the finest journalists and interviewers in this country.

"GB News thanks him for his 12 months of leadership, wisdom and advice, and we wish him well."

Mr Neil appeared on the BBC where he addressed his departure from GB News and told the show: “Well I had always been clear it wouldn't be a British Fox News.

“And I think you could do something different without going anywhere near Fox.

“Fox deals with untruths, videos of conspiracy theories and it deals in fake news.

“That's not my kind of journalism, I would never have set out to do that…”

Ms Bruce interrupted and asked whether that was the reason for his exit to which Mr Neil continued and said people should draw their own conclusions as to why he is on the BBC and not with GB News. 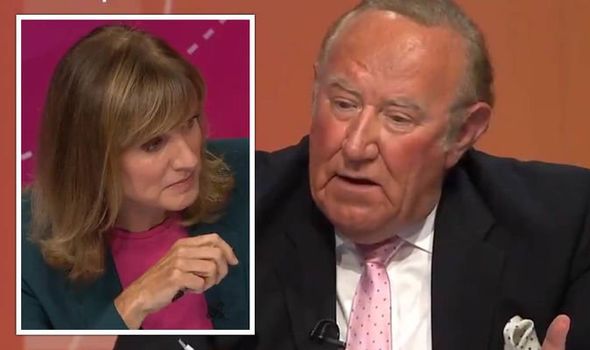 Andrew Neil was grilled by Fiona Bruce over his departure (Image: BBC)

What are the 12 universal laws?

Vaccines in sports at a glance

Cole Palmer only 10th youngest English ace to score in Champions League behind likes of Bellingham, Greenwood and Rooney

To jab or not to jab? Vaccinations still hot topic in sports

‘Leo, give me your shirt, I give you my mum’ – Desperate PSG fan begs Lionel Messi for his jersey with hilarious banner

How many children does Jessica Barden have?