Ronald Koeman: The Barcelona manager serves the second part of a two-match touchline ban today, having failed to overturn the suspension he received after being dismissed from his technical area during Barcelona’s game against Granada shortly before the end of April.

Koeman was punished for saying “what a character” to referee Gonzalez Fuertes and believes his punishment does not fit the crime. He was also upset that he had already served half his ban before the powers that be had considerered his appeal, finally getting around to upholding his punishment yesterday.

“What I can say is yes, I feel like it’s personal,” he said. “For saying ‘what a character’ I think it is not insulting, it is not a reason to sanction a person for two games, so there is something else. They have already sanctioned me with two games and I do not understand why the resolution lasts so long and it cannot be confirmed if I can be there tomorrow or not.” Koeman’s assistant Alfred Schreuder will take his place in the technical area. 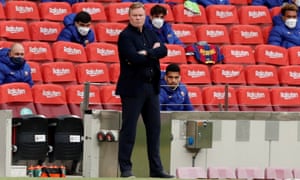 Ronald Koeman will be a conspicuous absentee from the touchline today. Photograph: Albert Gea/Reuters