Prince Charles labelled slavery an ‘appalling atrocity’ which ‘forever stains our history’ at a ceremony to mark Barbados cutting ties with the monarchy and becoming a republic.

The Prince of Wales hit out at the period when the UK was a leading player in the transatlantic slave trade as the ‘darkest days of our past’.

He said the ‘creation of this republic offers a new beginning’ for the Caribbean nation, which parted ways with the Queen at midnight.

When Charles becomes King, he will be head of state of many nations in the Caribbean and his words will be noted across the region.

But Barbados links to the British monarchy – which stretch back centuries – were severed when the nation’s first president, Dame Sandra Mason, was sworn into office, replacing the Queen as head of state.

During a televised open-air ceremony in the capital Bridgetown, the Queen sent the new republic’s president and people her ‘warmest good wishes for your happiness, peace and prosperity in the future’

She also said the island nation has a ‘special place’ in her heart for ‘its vibrant culture, its sporting prowess, and its natural beauty’.

Charles, addressing guests including the singer Rihanna and Barbados’ prime minister Mia Mottley, said: ‘The creation of this Republic offers a new beginning, but it also marks a point on a continuum, a milestone on the long road you have not only travelled, but which you have built.

‘From the darkest days of our past, and the appalling atrocity of slavery, which forever stains our history, the people of this island forged their path with extraordinary fortitude.

‘Emancipation, self-government and Independence were your way-points.

‘Freedom, justice and self-determination have been your guides.

‘Your long journey has brought you to this moment, not as your destination, but as a vantage point from which to survey a new horizon.’

The heir to the throne watched the symbolic moment of the Queen’s standard being lowered for the last time and the presidential flag raised in its place as Tuesday, November 30 began – marking the 55th anniversary of Barbados’ independence from Britain.

Boris Johnson said the UK and Barbados will remain ‘steadfast friends and allies’ with ‘a partnership built to last’.

There have been protests in the run-up to the ceremony, with activists in Barbados demanding an apology and reparations from the monarchy and UK Government for its role in the slave trade.

The UK legalised slavery on the island in 1661.

Successive monarchs supported or profited from the transportation and selling of people for profit during the 17th and 18th centuries.

The royal and the rest of the pro-slavery lobby would eventually lose the battle when abolitionists including William Wilberforce passed a bill banning the slave trade in 1807.

Charles’ speech was wholly positive and did not express any regret at the decision taken by Barbados’ leaders.

He listed the ways he will ‘remain deeply committed to this very special country’, highlighting the on-going efforts of his Prince’s Trust International supporting Barbados’ young people and his work with their government on issues like climate change.

The prince added: ‘I shall always consider myself a friend of Barbados.’ 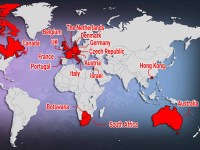 Which countries have Omicron Covid and what are they doing about it?

Britain’s commitment to maintaining a strong relationship with the Caribbean nation also appears a priority, with a trade delegation of 25 British companies, the first in three years, visiting earlier this month with Darren Henry, the prime minister’s trade envoy to the Caribbean.

Graham Smith, chief executive officer of the organisation Republic which campaigns for an elected head of state, said the Barbados’ decision could influence others: ‘A huge congratulations to Barbados for this historic moment in their nation’s story.

‘Barbados isn’t just doing themselves a favour, but are showing the way for the other 15 Commonwealth realms.’

He added: ‘The transition in Barbados has also triggered calls for slavery reparations and an apology from the royals for their family’s part in the slave trade.

‘Those calls aren’t going away and there’s no way the royals come out of that debate without significant damage to their reputation.’

Travel testing abolished for fully vaccinated travellers to the UK: the key questions

Worry is bad for the heart and increases diabetes risk – study

Three jailed over killing that led to tit-for-tat shooting