Atalanta had waited 31 years for this moment. As the clock ticked past 11.30pm on Saturday, they led 2-1 at Juventus in a game that had the potential to blow the Serie A title race open, drawing them to within six points of the league leaders.

To fight for the Scudetto was a bonus. A win would be glorious on its own. Atalanta had not beaten the Bianconeri in Turin since 1989, back when Claudio Caniggia was leading their attack and Cesare Prandelli marshalling the midfield. So long ago that Juventus had not even moved into the Stadio delle Alpi yet, let alone the Allianz Stadium that has been their fortress for the past decade.

As Atalanta boarded their train to the game this weekend, a Napoli fan goaded them with that history, asking whether they planned to make a game of it or to “gift [Juventus] the points like usual”. A club director, Mirco Moioli, responded using a slur term for people from the south of the country, for which he would later issue an official apology.

There would be no gifts, though, in Turin. Juventus had not lost at home to anyone in Serie A since 2018 – a run stretching back 36 games – yet Atalanta threatened to overwhelm them. Duván Zapata put the visitors in front after just 16 minutes, burying his shot beyond Wojciech Szczesny after exchanging passes with Papu Gómez – who shed Matthijs de Ligt with an artful reverse pivot.

It was a superb goal, the attack launched at breakneck speed after Paulo Dybala was dispossessed, but even more dazzling was the football that preceded it. Atalanta were enjoying 70% of possession. They had not allowed Juventus – the reigning champions of eight consecutive seasons – to touch the ball in their half for more than eight minutes.

Despite losing their best wing-back, Robin Gosens, to injury during warm-ups, Atalanta used width to dominate. Timothy Castagne and Hans Hateboer flew up the flanks, with the back three taking turns to plug gaps. The manager, Gian Piero Gasperini, included all three of Gómez, Zapata and Josip Ilicic in attack, each with the freedom to roam and create overloads as they saw fit.

If there was any criticism of Atalanta, in the first half, it was only that they failed to score again. Juventus had appeared to be on the ropes, but found a way to refocus during the half-time break and came out ready to throw a few combinations of their own.

Still, the equaliser was a stroke of fortune. Dybala aimed a cross into the box and struck the arm of Marten De Roon a yard away. It was tight to his body but folded in front and could be deemed to create the “unnatural silhouette” we have heard so much about since the International FA Board tweaked football’s handball law last summer. A penalty was awarded. Cristiano Ronaldo converted.

Juventus went looking for a knockout. Atalanta refused to back down. Gasperini sent on Luis Muriel and Ruslan Malinovskiy. The former set up the latter to restore their advantage in the 80th minute. 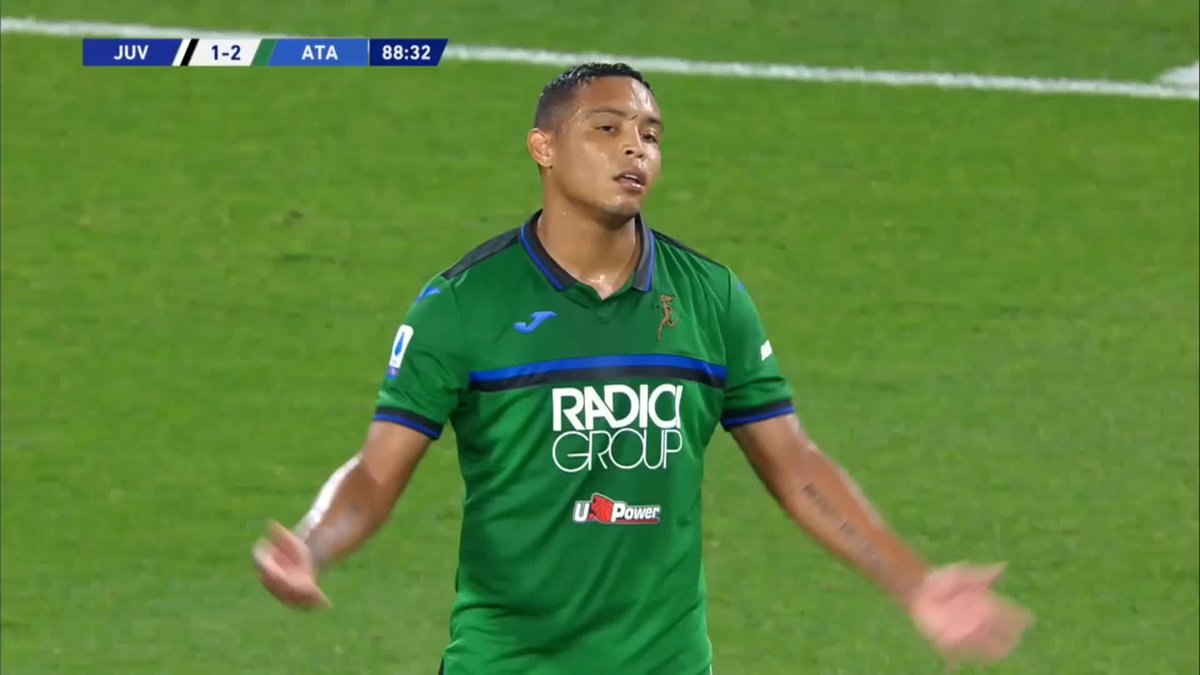 Juve get their second penalty of the match for hand ball and Cristiano Ronaldo converts it ⚫⚪ pic.twitter.com/BNgVlvXJaT

It was a violent finish, crushed into the bottom corner with a force that seemed to speak of the determination in this team, a refusal to be cowed by this opponent, these circumstances, those three decades of always coming up short in Turin. It felt like a winning goal. But it wasn’t. In the 89th minute, Juventus were awarded another penalty.

This one felt even more casual than the last, Gonzalo Higuaín chasing a ball that was running out of the area and throwing a boot at it, from where it pinged on to the arm of Muriel. The referee, Piero Giacomelli, whistled. Ronaldo did his thing from the spot.

Both penalty decisions were in-line with the interpretation of the law that has prevailed in Italy all season. Whether that makes them right is another debate. “This is the rule in Italy,” reflected a bitterly disappointed Gasperini afterwards. “The players should cut off their arms.”

The president of the Italian Referees’ Association, Marcello Nicchi, denied that the law was being differently applied on the peninsula, insisting that Nicola Rizzoli, the man in charge of assigning officials to games, was in touch with counterparts from other top European leagues every week. But the numbers speak for themselves.

There have been 159 penalties awarded in Serie A this season in 319 games – almost one in every two. Contrast that with 73 in the Bundesliga, 83 in the Premier League, or 89 in Ligue 1. The previous record for a completed Serie A campaign was 140, set all the way back in 1949-50.

Gasperini’s protest was not against systemic bias. Juventus have been awarded 12 penalties this season, but they have also had 10 against them – many of those for handball. De Ligt was penalised after a shot deflected from his thigh on to his arm during the Turin derby just one week before.

The frustration is broader, at a rule that can so casually define the outcome of a game. It is easy to understand why any governing body would want to reduce the subjectivity of a decision, saving referees from the unenviable task of working out whether a handball was “deliberate” but to punish players and who have not even made mistakes cheapens the 90 minutes of football surrounding.

On this occasion, the interpretation may have ended any hopes of a compelling end to Serie A’s title race. With Lazio suffering a third consecutive defeat, Juventus now have an eight-point cushion over their closest challengers.

For Atalanta, the title was only ever a distant dream. They have already shattered all expectations by effectively securing a return to the Champions League with six games to go. The satisfaction of beating Juventus would have stood on its own terms, in a year when the Old Lady’s president, Andrea Agnelli, had questioned whether they deserved a place in Europe’s premier club competition on the basis of “one good year”.

Then again, perhaps that reckoning has only been postponed. Following the draw last week, we now know it is possible for these teams to meet in the final this August. “Dear Agnelli, we’ll see you in Lisbon,” ran one headline on the L’Eco Di Bergamo newspaper website on Sunday.

Juventus have a longer road to get there, with a 1-0 deficit still to overturn in their last-16 tie against Lyon. Their manager, Maurizio Sarri, criticised his team heavily after their first leg defeat, but also made a remark that feels telling today. “In Italy, we would have had two penalties,” he said back then. “In Europe there is a different set of parameters. We will have to adapt.”

Ander Herrera: if PSG don't win the Champions League, it won't be a failure
Arsenal are investigating the transfer of Pepe for 72 million pounds. The club wants to find out if he overpaid
Ole Gunnar Solskjaer: Manchester United knows how much it hurts to lose in the semi-finals. It's time for the leading players to prove themselves
Arsenal announced the departure of sports Director of Sunley
The Bayern coach who destroyed Barca. He was on Lev's staff at 7:1 in Brazil
Barcelona offered Pochettino a 1+1 contract. The club is in contact with Allegri and Henri
Call me Neptune. Ronaldo dived to a depth of 14 meters
Source https://www.theguardian.com/football/2020/jul/13/atalanta-distant-serie-a-dream-dashed-ronaldo-juventus-penalty-handball-rule-cheapens-title-decider