Dozens of protesters blocked the entrance to Downing Street on Monday evening as Prime Minister Boris Johnson invited 20 of the most influential business figures from across the world to promote Britain's interests internationally. But angry demonstrators chanted "arrest Bill Gates" with some protesters holding up anti-vax signs attacking the Microsoft founder. Footage also showed the angry crowd bashing into an incoming car as they tried to look through the tinted windows to see who was inside with police quickly setting up a cordon and fighting off the protesters.

The angry scenes began late afternoon with a live stream of the protest documenting more and more protesters joining the crowd.

By around 6pm, the crowd became more energised with chanting being heard and several attendees shouting on microphones.

Protesters were calling for Bill Gates to be arrested and called him a “murderer”.

One sign carried by a demonstrator espoused anti-vax sentiments and called the vaccines “toxic”. 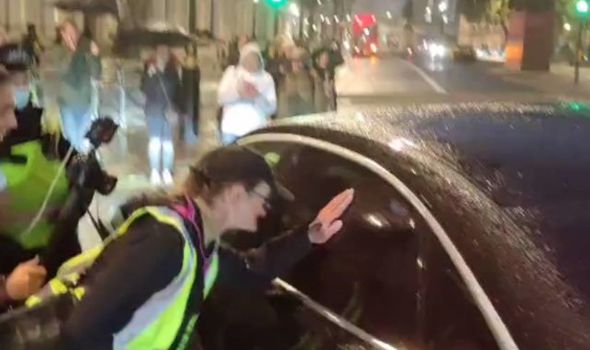 Police quickly pushed back the crowds away from the cars (Image: Subject Access)

As a car arrived at Downing Street, the protesters circled the vehicle and desperately tried to figure out who was inside.

But before they could, police pushed the crowd back who began chanting louder to arrest Bill Gates.

Police escorted the car to another road where it could enter Downing Street another way.

Boris Johnson was to host around 20 of the world's top business leaders at Downing Street in a bit to win their support for his political campaigns.

Anna Soubry slams Boris Johnson for ‘swanning off to Marbella’ 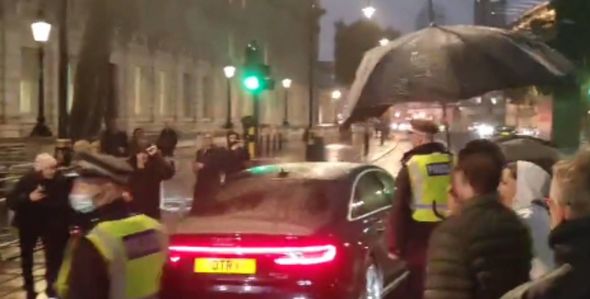 Police escorted the car away from the protesters (Image: Subject Access)

The meal kicks off the Global Investment Summit which will see hundreds of business leaders attend to listen to how the UK can lead in green technology ahead of Cop26.

The Queen and the Royal Family will host the event at Windsor Castle on Tuesday with some of the leaders invited to an exclusive dinner at Downing Street beforehand. 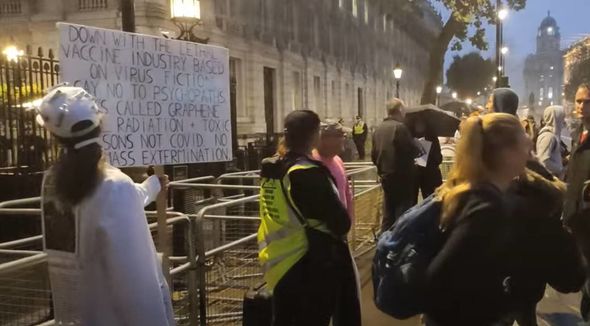 Chancellor Rishi Sunak is also hosting a separate dinner with the other business leaders at Guildhall.

The following day, business leaders will be whisked to Windsor Castle and will be served drinks in St George's Hall.

The Queen, the Prince of Wales and the Duke of Cambridge will be in attendance.

A spokesperson for the Prime Minister said: “The aim of the summit is to secure billions of pounds of new international investment to support the PM’s 10-point plan for a green industrial revolution."