Mr Hutchings, 78, of Cornwall, who denies the charge, has been told his trial will begin at Belfast Crown Court on March 9 next year. The trial should last two weeks but is likely to stretch to six weeks because of Mr Hutchings very poor health, which requires him to have kidney dialysis three times a week. He told the Daily Express last night that he had “grave doubts” that he will receive a fair trial in Northern Ireland.

Mr Hutchings said: “I am glad that this is coming to a conclusion one way or another nearly six years after this kicked off in 2013.

“But I have grave doubts that I will get a fair trial in Northern Ireland. I have no faith in the judicial system over there.”

He is charged with attempted murder and attempted grievous bodily harm with intent over the killing of John Patrick Cunningham, 27, in Co Tyrone in 1974.

Unarmed Mr Cunningham, who was said to have had learning difficulties and feared men in uniform, was shot in the back as he fled from an Army patrol in what Mr Hutchings accepts was “a tragedy”.

Mr Hutchings is one of seven British soldiers currently facing trial over “legacy” killings during The Troubles.

He has been investigated and cleared of any wrongdoing twice before.

He was not in court for the brief pre-trial hearing yesterday during which the judge was told that an up-to-date medical report on the former member of the Life Guards regiment made for “grim reading”.

Senior judge Mr Justice Colton also ruled that Mr Hutchings will be formally arraigned via videolink later this month on the two charges he faces ahead of next year’s trial. 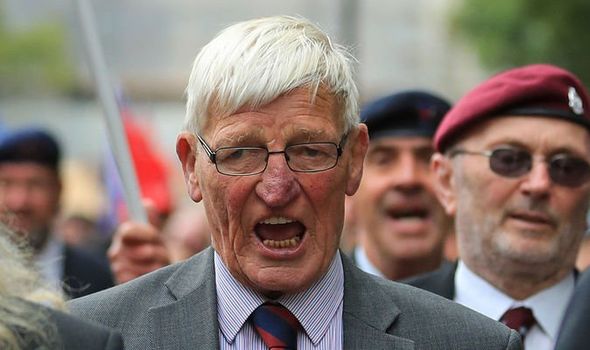 Both the prosecution and the defence agreed that the arraignment hearing can take place from a courtroom in Plymouth, England due to Mr Hutchings poor health.

Defence barrister Ian Turkington told Mr Justice Colton that a medical report had been lodged with the court on August 15 this year and a copy was also provided to the Public Prosecution Service in Northern Ireland.

A previous court hearing was told that Mr Hutchings was suffering from “acute renal failure’’ and would spend the rest of his life on dialysis.

Mr Turkington said that there would need to be consultation between Mr Hutching’s primary care health officials in England with their counterparts in Northern Ireland.

In June this year, Mr Hutchings was denied a trial by jury.

The Supreme Court in London which gave an unanimous ruling that the trial should be held without a jury.

The judge-only “Diplock system” was brought in to handle terrorism cases amid fears a jury could be intimidated.

The Daily Express has long campaigned for an end to the persecution of British soldiers, contrasting it with the treatment of IRA terrorists.

Under Tony Blair’s 1998 Good Friday Agreement, more than 500 convicted terrorists were released early, while “Letters of Comfort” were issued to suspected terrorists telling them they would not be pursued.

Bale's agent: Gareth is happy at Real Madrid. He wants to provide for himself for life
The salary cap is a post-virus goal of UEFA and the Bundesliga boss. Here's how the limit works in MLS, Rugby and China
Kevin-Prince Boateng on playing in MLS: I will be Mohammad Ali, leading the people
Messi may not play with Mallorca due to adductor muscle discomfort
Alexey Miranchuk can move to Fiorentina (Betting Insider)
Henri on racism: Why is this still happening in 2020? We demand changes
The defender from Burkina Faso is the new star of the Bundesliga. With him, Bayer won 11 matches out of 13
Source https://www.express.co.uk/news/uk/1177808/army-veteran-uk-armed-forced-northern-ireland-court-trial-attempted-murder?utm_source=feedburner&utm_medium=feed&utm_campaign=Feed%3A+daily-express-news-showbiz+%28Express+%3A%3A+News+%2F+Showbiz+Feed%29

Is Sally Webster going to expose Geoff’s abuse of Yasmeen in Coronation Street?

Which of your disgusting habits are your flatmates texting their friends about?

'People are just so tired of dealing with racism every day'

Man, 30, appears in court for murder of 12-week-old baby boy in Cambridgeshire

Customers left 'fuming' after water company calls them at 3am

Full list of every McDonald's open across Merseyside & Cheshire

Kitchen is scene of most accidents in the home, new data shows

Kitchen is worst location for accidents in the home, new data shows

Kitchen is location for most accidents in the home with biggest danger from knives, data shows

Madeleine McCann: 'We believe she is dead' say German prosecutors as investigation hones in on suspect

Best homeware discounts as John Lewis, Debenhams and Matalan slash up to 50% off prices in leftover lockdown stock sales

Royal Ascot prize money cut to nearly half of 2019 figure

When is my MOT due – have expiry dates been extended?

Who is I May Destroy you actress Michaela Coel?

Shielding to continue for longer for 130,000 people in Wales

Pensioner, 81, left heartbroken after prized pigeons were killed in a fire

Who is John Boyega, does the Star Wars actor have a girlfriend and what’s his net worth?

Love Island in the time of Corona: will an Aussie replacement suffice?

Stephen Gallacher tees off the golf season in West Lothian

China will crush dissent in Hong Kong, just as it did in Tiananmen Square | Ma Jian

Joshua Kimmich: 'We have to wear masks, sit alone and shower at home'