Lockdown albums have already been noted in pop, rock and rap, but August brings another, hazier, folkier creature to this peculiar summer. Alula Down are partners Kate Gathercole and Mark Waters, members of Herefordshire’s brilliant Weirdshire collective, who put on traditional, psychedelic and experimental music nights in simpler times. The duo have explored British ballads in the past, such as Master Kilby and Polly Vaughan, but they have also collaborated with author Max Porter on a stage version of his Booker-longlisted novel, Lanny, where they impressively worked their improvisational muscles. 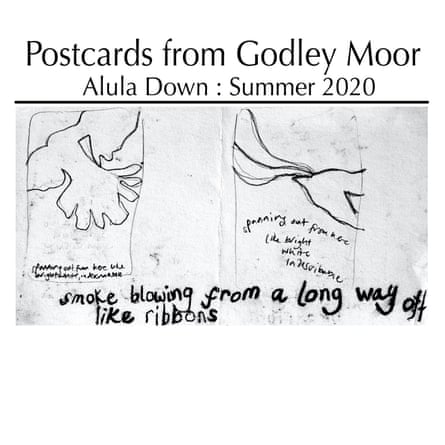 Now arrives the first of four seasonal albums, with accompanying postcard liner notes and artwork, exploring the band’s relationship to the land around them in the Covid-19 pandemic. Gathercole and Waters live and record rurally in their shed-based home studio, The Radar Station; this project is all about the chance encounters and sharp details of sounds that cut through. The whirring of a passing plane and wind blowing through trees affords a strange air of shimmering, early summer lust to opening folk ballad Searching for Lambs. Echoing rain blends with shuddering drones and lyrics about “dripping dew” on Section XVII Weather Proverbs, which uses text from an early 20th-century song collector, Ella May Leather.

Post-rock and ambient fans will relish the shape-shifting textures, which make deeper points, too. No Peace mixes birdsong, thunderstorms and scrawnily plucked ukuleles to convey unease. Interruption uses a processed piano to pointedly bury a speech about the removal of common land from its people. Gathercole’s voice is featherlight and meaningful, recalling Vashti Bunyan and late 60s private-press folk, tethering the listener to every syllable. It’ll be fascinating to hear what happens with the next releases, as the darker seasons settle in.

Also out this month

Stick in the Wheel’s Hold Fast (From Here) sees the ever-ambitious Nicola Kearey and Ian Carter rallying to include working-class, urban and vulnerable voices in the folk canon. Their choices of songs can be brilliant – A Tree Must Stand in the Earth is particularly jolting – but an overreliance on Auto-Tune and electronics often swamps their intentions. Rhodri Davies’ Telyn Rawn (Amgen) is a much more ancient proposition, but no less inventive: he had a medieval Welsh harp reconstructed for the album, after all. Shades of west African kora-playing ripple through compositions influenced by Welsh bardic rituals. David A Jaycock also releases a gorgeously simple solo album, Murder, and the Birds (Triassic Tusk), exploring the songs of Lancashire and beyond through double-tracked vocals, guitars and synthesisers.

Werner scored for Chelsea for the first time
Fernando Santos: Ronaldo can play until the age of 40, but he will leave if he feels that he can no longer be himself
Manchester City want to sign Alaba. To do this, the club needs to sell Zinchenko
The President of Atletico Madrid on Messi at the club: If Leo wants to play with Suarez, anything is possible. We must hope
Saint-Etienne announced fofan's move to Leicester. The 19-year-old defender will be paid 35+5 million euros
Manchester United are only ready to rent Dembele
Drogba to receive UEFA President's award for outstanding achievement
Source https://www.theguardian.com/music/2020/aug/14/alula-down-postcards-from-godley-moor-summer-2020-review-weirdshire

COVID-19 cases rising among US children as schools reopen