Alan Shearer urged the Premier League to kick out breakaway clubs and Gary Neville accused the big teams of not wanting competition as plans for a European Super League came under fierce attack. 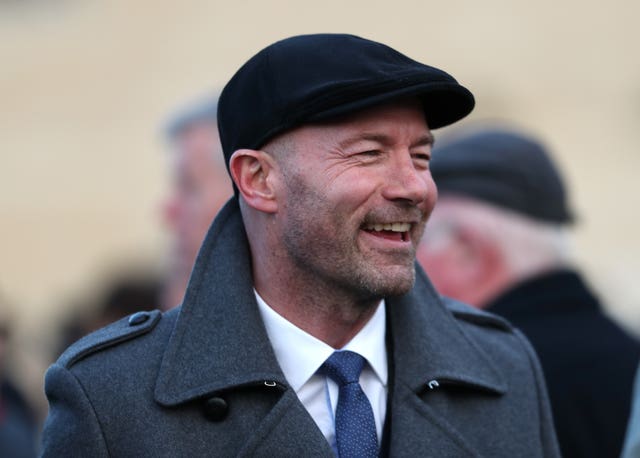 Alan Shearer, the Premier League’s record goalscorer, has urged breakaway clubs to be kicked out of the competition (David Davies/PA)

But the plan has provoked widespread outrage with high-profile figures from football and politics uniting to condemn the proposals.

“These clubs want to have their cake and eat it, they think they can play these Super League games in midweek and their domestic leagues at weekends, but I hope the leagues say no, that’s not happening.”

Neville had called for clubs to be relegated for this “criminal act” while working for Sky Sports on Sunday, and the former England defender continued his attack on Twitter ahead of Monday’s Premier League game between Leeds and Liverpool at Elland Road.

Leeds players should walk to the side of the pitch and just let them keep scoring ! They don’t want competition…. https://t.co/PpLLZhwW1C

“Leeds players should walk to the side of the pitch and just let them keep scoring! They don’t want competition,” Neville tweeted, before later adding: “Join us if you like for Leeds v Greeds.”

Mateusz Klich, the Leeds midfielder, tweeted an image of a banner which read: “Created by the poor, stolen by the rich”, while the club’s owner Andrea Radrizzani also spoke out.

Radrizzani posted on Twitter: “Absolutely against the sporting spirit, the dream of millions of fans to conquer the champions on the field, with planning, vision, work. Kill dreams of players and fans. The teams are fans and WE are custodians of the club.”

Former England, Tottenham and Barcelona striker Gary Lineker believes fan power can stop the plan, tweeting: “Football is nothing without its fans. We’ve seen that clearly over the last 12 months.

“If fans stand as one against this anti-football pyramid scheme, it can be stopped in its tracks.”

Lineker’s ex-England teammate David Seaman described the plan as a “disgrace”, while former Arsenal manager Arsene Wenger says the move goes against everything football is based upon.

Football is nothing without its fans. We’ve seen that clearly over the last 12 months. If fans stand as one against this anti-football pyramid scheme, it can be stopped in its tracks.

Wenger, now FIFA’s chief of global football development, told talkSPORT. “Football has to stay united – that is the most important thing – and based on sporting merits and overall to respect the history of European football. I believe personally that this idea will not go far.”

Southampton boss Ralph Hasenhuttl said he foresaw “war” and reiterated his stance against the move.

He said: “There cannot be any other opinion about it. It’s a big threat, what I see coming up, war, if you want, from the big clubs.

“We will see what the future brings but it’s a big threat and we have to fight against it.”

The League Managers’ Association said it will fully support any “appropriate measures” taken against the breakaway clubs, saying in a statement: “We believe that any such league would be catastrophically destabilising to the entire European football pyramid, with deep and far-reaching consequences.”

The idea of a Super League was also criticised by Mesut Ozil and Ander Herrera.

Kids grow up dreaming to win the World Cup and the Champions League – not any Super League. The enjoyment of big games is that they only happen once or twice a year, not every week. Really hard to understand for all football fans out there…⚽💔

Former Arsenal and Real Madrid midfielder Mesut Ozil, a World Cup winner with Germany in 2014, said on Twitter: “Kids grow up dreaming to win the World Cup and the Champions League – not any Super League.

“The enjoyment of big games is that they only happen once or twice a year, not every week. Really hard to understand for all football fans out there.”

Herrera, the former Manchester United midfielder now playing for Paris St Germain, said in a statement posted to Twitter: “I fell in love with popular football, with the football of the fans, with the dream of seeing the team of my heart compete against the greatest.

“If this European super league advances, those dreams are over, the illusions of the fans of the teams that are not giants of being able to win on the field competing in the best competitions will end.

“I love football and I cannot remain silent about this, I believe in an improved Champions League, but not in the rich stealing what the people created, which is nothing other than the most beautiful sport on the planet.”

Former Barcelona and Real Madrid winger Luis Figo tweeted: “This so called ‘Superleague’ is anything but ‘Super’.

“This greedy and callous move would spell disaster for our grassroots, for women’s football, and the wider football community only to serve self-interested owners, who stopped caring about their fans long ago, and complete disregard for sporting merit. Tragic.”

Political figures were also quick to condemn the Super League, with Prime Minister Boris Johnson saying football clubs were more than “great global brands” and needed to have a link with their fans and communities.

Speaking to reporters in Gloucestershire, Johnson said: “We are going to look at everything that we can do with the football authorities to make sure that this doesn’t go ahead in the way that it’s currently being proposed.”

Julian Knight, chair of the Digital, Culture, Media and Sport Committee, called for “a fan-led review of football” while Lord Pendry, the president of the Football Foundation and a former shadow minister for sport, said in a statement to the PA news agency: “I wish to call on all football supporters to stand up and fight for our football heritage.”