He told listeners: "Boris Johnson would lose an election if it was held today and no, I'm not doing an Emily Maitlis."

The swipe comes after Emily Maitlis came underfire earlier this year for her opening Newsnight remarks against the Government. 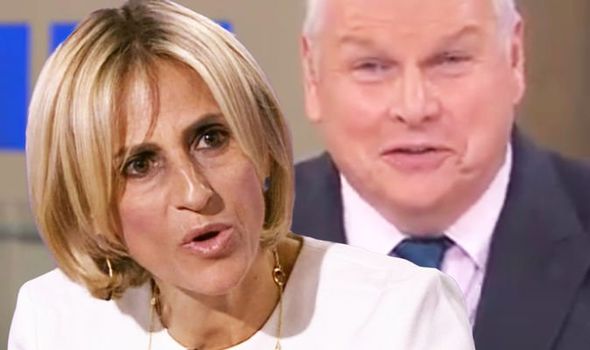 Maitlis’ notorious Dominic Cummins monologue in May was met with a significant backlash among Newsnight viewers.

The BBC later said that the opening remarks from the host did not meet the required standards of due impartiality.

Boulton made the remarks as he mentioned "recent data showing a swing from the Conservatives to Labour".

He cited the latest Opinium polls that show a seven percent swing to Labour from the Conservatives.

Ødegård prematurely returned to the real world of rental Sociedade
Arsenal and Roma are discussing the exchange of Torreira for diavar
The trained bear was brought to the dressing room of the Sakhalin Resident
De Ligt had shoulder surgery and will miss 3 months
Modibo – infected with coronavirus Barcelona player. The disease passes without symptoms
Lichtsteiner finished his career. The former Juve and Arsenal defender is 36 years old
Matuidi left Juventus. The midfielder will move to Inter Miami Beckham
Source https://www.express.co.uk/news/uk/1310364/BBC-Newsnight-Emily-Maitlis-Sky-News-Adam-Boulton-Boris-Johnson-latest?utm_source=feedburner&utm_medium=feed&utm_campaign=Feed%3A+daily-express-news-showbiz+%28Express+%3A%3A+News+%2F+Showbiz+Feed%29

Car almost submerged as driver gets stranded on Flamborough beach

Who is LeToya Luckett and did her husband Tommi Walker cheat on her with a ‘side chick’?

University fire as emergency crews scrambled to blaze on campus

The Guardian view on Kamala Harris: a safe and historic appointment | Editorial

Girl, 11, killed after being hit by car in horror crash as family pay tribute

Belarus opposition leader a victim of tactics from the Lukashenko playbook

‘A story of hope’: how the Covid downturn could help Australia rebuild from its black summer

This pandemic means we don’t live in a timeline any more. It's more of a timesoup | Josephine Tovey

'This is a wake-up call': How will pro cycling address its own climate crisis? | Kieran Pender