The Duomo di Milano is where miracles are said to happen.

Neil Lennon, though, could do with one taking place not in the house of God but in AC Milan ’s cathedral of football, the San Siro.

The embattled Celtic boss might have the backing of the board but he is bruised from the barracking from the fans who quite simply have had enough.

His side are out of Europe, out of the Betfred Cup and, it is said, out of ideas. Oh, and Celtic also trail 11 points behind Rangers in this, perhaps the most historic seasons of all.

But tonight Lennon believes the fightback starts here because if he feels he does not need to impress Dermot Desmond or Peter Lawwell, the hundreds of thousands of Celtic supporters need to witness something.

Never before has a Europa League dead rubber had more significance. There is no suggestion the Celtic hierarchy will axe Lennon if another defeat plays out. Not yet anyway. But for his long-term chances, an improvement surely has to be visible.

The Group D clash does not kick off until 5:55pm but we’re live now for all the build-up and team news. 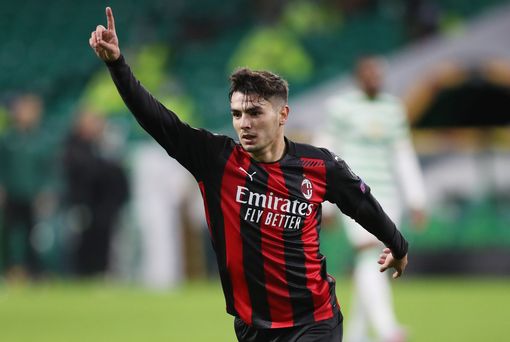 Under-fire Neil Lennon will be desperate for a result from anywhere to turn things around at the Hoops.

He might have hoped for more favourable opposition than AC Milan, though.

The Rossoneri have been in the doldrums for years but are well and truly looking like title contenders now.

Stefano Pioli’s side haven’t lost in the league after nine games and they proved they don’t need Zlatan Ibrahimovic to win by sweeping aside Fiorentina at the weekend.

The Swedish striker is out for tonight’s game but his team have plenty of other threats such as Brahim Diaz, who scored in the reverse fixture.

Ahead of the match, Christopher Jullien has thrown his full support behind under-fire Neil Lennon, who surely needs a result in Italy to save his skin.

He’s a great man and a great coach and I’m just so happy to have him on my side.

He knows we all back him and that we’re all with him and that everyone at the club is behind us – this is the respect we have for each other and I’m glad it is that way.

It’s all systems go at the San Siro this evening as Celtic look to dig their manager out of a hole with a big result in Italy.

Qualification may be out of the Hoops’ reach but there is pride on the line as they look to prove a dismal European campaign is not reflective of their ability.

There is plenty on the line for the hosts, meanwhile, as Stefano Pioli’s team look to ensure their own passage for the knockout stages.

We’ll have all the build-up and every kick of the ball right here!

Pogba's time at Manchester United is running out again. The club did not buy a top player, but a beautiful story for social networks, Paul lost the battle for influence to Brun
Roma made an extra substitution in the Italian Cup match. The club faces a technical defeat
The Premier League is investigating the transfer of Snodgrass to West Brom. West Ham banned him from playing against them at the sale
Football has broken into Fortnite. The game will host the Pele Cup, add the uniforms of Man City, Juventus and Milan, and a legendary celebration
Shalimov about Miranchuk: Atalanta is an ideal team for him. Don't go anywhere
Agent about Wendel in Zenit: A risky deal, may not be justified
Shevchenko about Ukraine at Euro 2020: Goal-minimum-exit from the group
Source https://www.dailyrecord.co.uk/sport/football/football-news/ac-milan-vs-celtic-live-23110508