The cold, tired and desperate relatives camped outside the Barrio Obrero general hospital in Asunción don’t need charts or datasets to confirm what they can see with their own eyes.

As Paraguay records the world’s highest daily proportion of Covid deaths, the huddled families wait for news of their loved ones – and for the sudden requests for medicine and supplies that the country’s chronically underfunded health system cannot provide.

“There’s really so little support from the government – it’s a disaster,” said Jessica Ortigosa, whose father was languishing in a chair instead of a bed. “They should have prepared for all this from the start of the pandemic.”

As she spoke, two women collapsed on a sofa in the hospital’s entrance, their uncontrollable tears announcing the death of Paraguay’s most recent coronavirus victim. 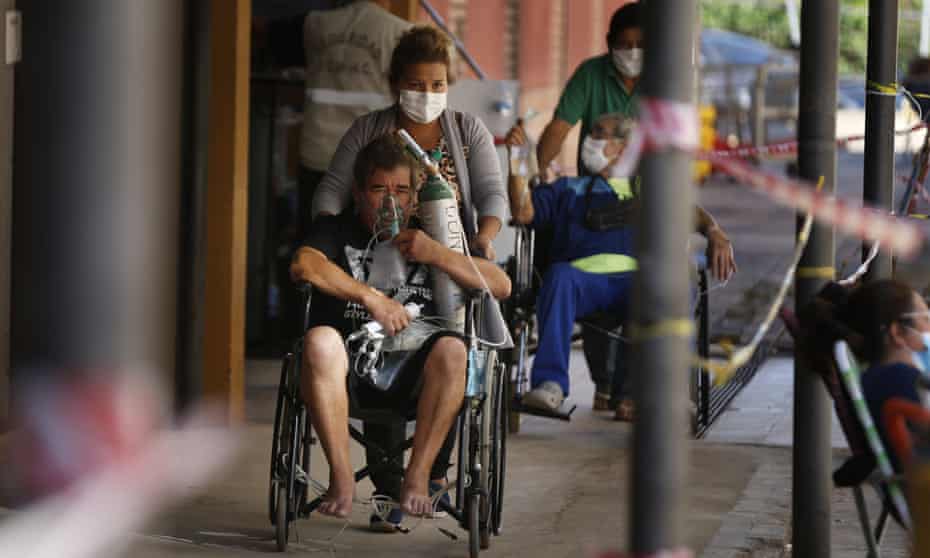 Coronavirus patients are taken to the lab for a test at the Clinicas hospital in San Lorenzo, Paraguay. Photograph: Jorge Sáenz/AP

Natalia Bernal, who stood nearby, was relieved to be able to drop the brave face she had just put on for her mother, who lay intubated in hospital a day after losing her husband to Covid.

“I couldn’t let my mom see me in the state I was in,” said Bernal. Still, she added, at least her mother had got a bed.

“We needed intensive care yesterday for my dad and there wasn’t any. There just isn’t any.”

And as the US and Europe begin to emerge from the pandemic, discard their masks and ponder how best to spend the recovery funds, the crisis most evident in Paraguay is playing out across much of South America.

India may have commanded much of the world’s attention over recent weeks, but Paraguay, Suriname, Argentina, Uruguay, Colombia, Brazil and Peru are suffering – in that order – a silent decimation by Covid unlike that anywhere else in the world. Even in seventh-placed Peru, the number of deaths per million stands at 9.12 – more than three times the figure in India.

In the early months of the pandemic, Paraguay and nearby Uruguay were praised as Latin America’s standout success stories in Covid management.

But since March the two countries have seen an explosion of the disease, largely attributed to the aggressive Brazilian variant that has torn through much of South America, and to decreased compliance with social distancing measures. 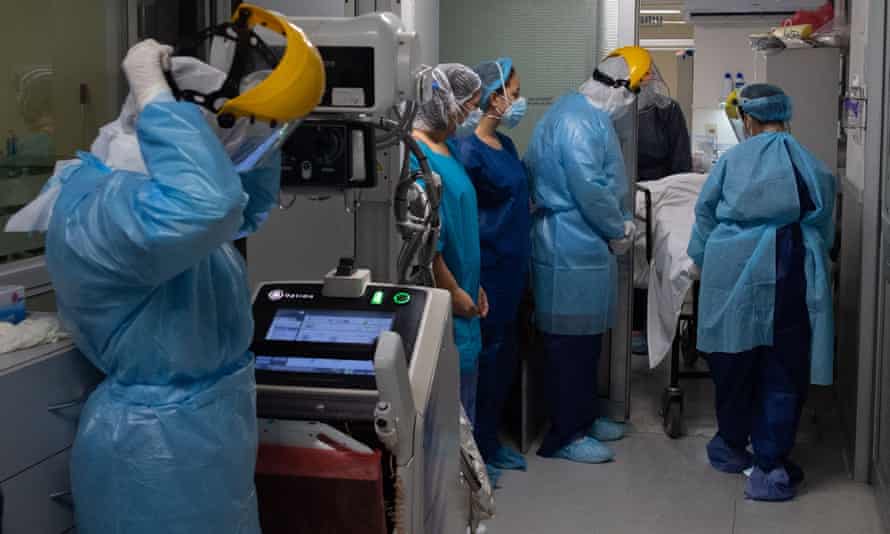 Morgue workers remove the body of a patient who died of Covid-19 at a private hospital in Montevideo, Uruguay. Photograph: Pablo Porciuncula/AFP/Getty Images

In Uruguay, not even one of Latin America’s quickest vaccination programmes has been able to contain the spread. Paraguay, meanwhile, has faced the continuing emergency under the strain of entrenched poverty, a historically underfunded health system, and with many questions over government corruption. Anger and frustration prompted widespread street protests earlier this year and a manslaughter case against the government has been opened by the public prosecutor’s office.

Argentina was also seen as a model, with low case numbers at the start of the pandemic when the government introduced strong restrictions that were respected by the public.

But that scenario has changed drastically. Covid has become Argentina’s main killer, far outstripping heart disease and cancer and claiming an average of 528 deaths a day over the past two weeks.

Vanina Edul, an ICU doctor in Buenos Aires, says the lack of the kind of scenes witnessed in some countries during the first wave of the pandemic is misleading: “What generates the notion of sanitary collapse is when people die in their homes or on the street, but in Argentina people are dying behind closed doors in Covid wards so Covid deaths remain invisible and almost unreal.”

“Our poverty markers have grown hugely in the last decade, our inflation rate is one of the highest in the world, so why should we be expected to suddenly become geniuses at managing a calamity like this?” he asks. 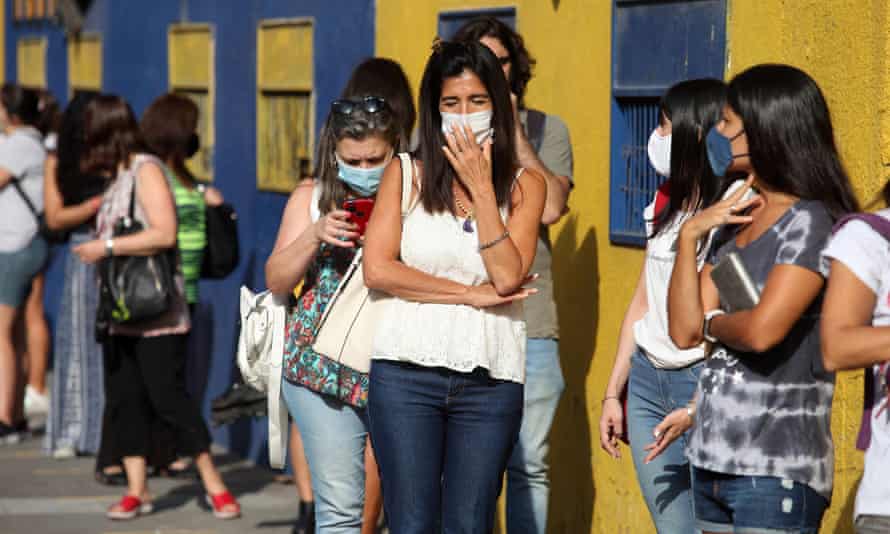 Tensions between the ruling progressive Peronists, who have stood by the science but allowed their traditional populist reflexes to influence decisions, and the pro business Together for Change opposition, with its denialist tendencies, have not helped.

Earlier this week, the government announced an overhaul of the country’s health system to integrate public and private care providers – a decision Belocoppitt likens to “reorganising your army in the middle of a war”.

And yet Argentinians remain optimistic – and largely unaware of the high death rate – as the news is drowned out by the country’s complex political wrangling.

Argentina’s vaccination programme is in full swing and the vaccination menu has diversified with Sputnik, Sinopharm and AstraZeneca, the main vaccines administered. Almost 40% of the population has got at least one jab and nearly 8% two jabs so far.

While underinvestment, economics, new variants and slow vaccination programmes bear responsibility for much of the region’s current crisis, so do many of its politicians. And no leader on the continent faces a charge sheet quite as damning as that of Jair Bolsonaro.

Brazil, about to reach the awful landmark of 500,000 deaths, has been led by a president who dismissed the coronavirus as a “little flu”, who resisted containment strategies, and who was fined last weekend for failing to wear a mask at a biker rally in São Paulo. He is now being investigated by a congressional inquiry over his calamitous response to the public health emergency. 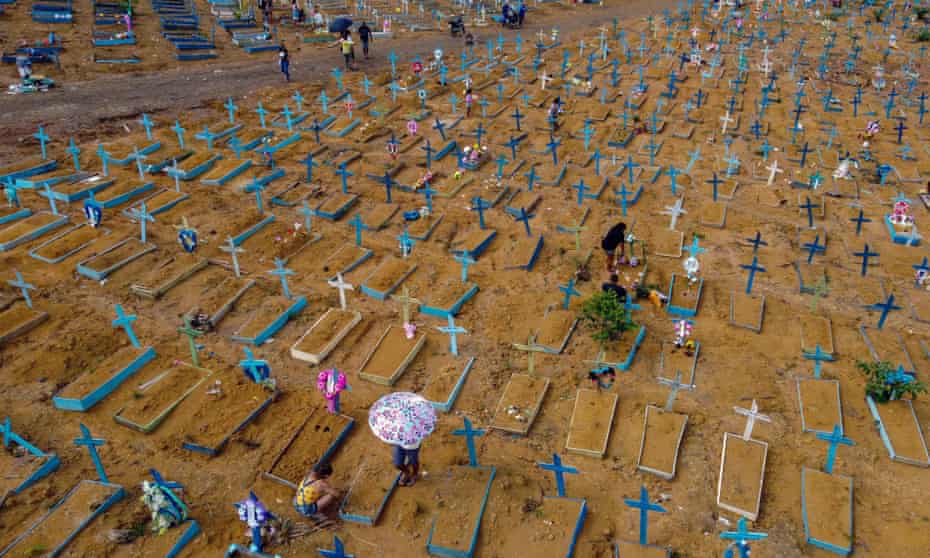 Those involved in the Covid response – including representatives of pharmaceutical companies – have told the inquiry that the Bolsonaro administration dismissed offers to acquire the vaccine last year. The country has so far managed to immunise just 11.4% of its 212 million citizens.

Worse still, acceptance of the vaccine has also been stymied by Bolsonaro’s vehemently anti-science posturing.

“The biggest issue in Brazil – and one that’s having a terrible effect on vaccine take-up – is the denialism in politics,” said Chrystina Barros, a member of the group fighting Covid-19 at the Federal University of Rio de Janeiro.

“We have a denialist president whose speech and behaviour run contrary to medical advice – and which are influencing people against getting the vaccine. It’s a perfect storm.”

With average daily deaths of 2,000, Brazil is becoming increasingly isolated worldwide. Several nations – including its neighbour Argentina – are restricting entry to Brazilian passengers, and the country has been the subject of international opprobrium.

“If Brazil doesn’t take the pandemic seriously, it will continue to affect the entire neighbourhood there and beyond,” Tedros Adhanom Ghebreyesus, director-general at the World Health Organization, said at the end of March. “It’s not just about Brazil.”

Political upheaval – not to mention decades of underinvestment in public healthcare – has also taken its toll in neighbouring Peru.

Héctor Araújo, a 51-year-old nutritionist who worked in a clinic for the elderly in central Lima, died a fortnight after being diagnosed with Covid. He left behind three children aged 18, 16 and 10.

“He died because of the health system’s inefficiency,” said his younger sister, Patty. “Then the disease consumed him.”

Despite making his social security payments, Héctor Araujo spent 10 days in intensive care in a hospital that lacked the staff needed to deal with complicated cases.

“My brother needed 24-hour attention with specialists and ICU equipment that they couldn’t give him,” said Patty Araujo. 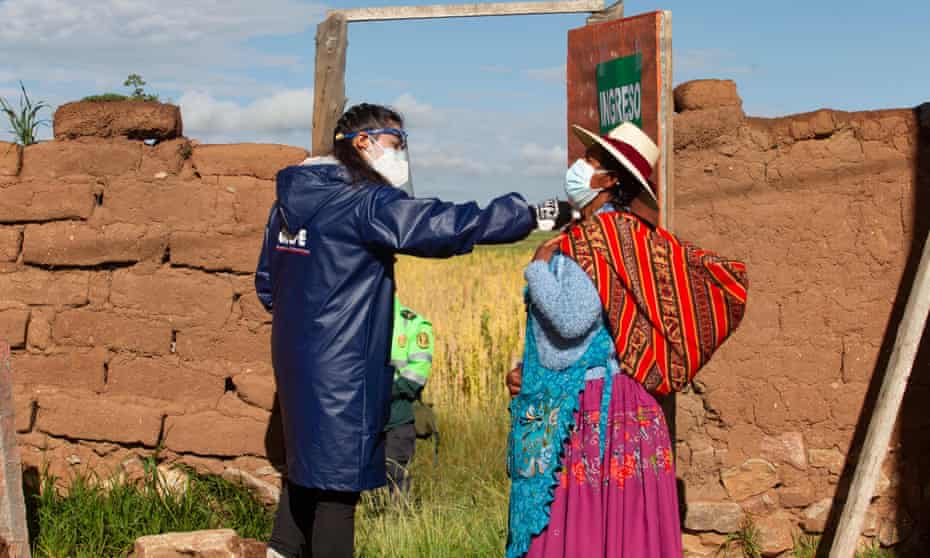 A government worker checks the temperature of a Quechua indigenous peasant arriving to vote in the village of Capachica, in Puno, Peru. Photograph: Juan Carlos Cisneros/AFP/Getty Images

She, like tens of thousands of bereaved Peruvians, is furious at the successive governments that have invested a paltry portion of GDP in the healthcare system - less than half what neighbouring countries put into public health – despite two decades of strong economic growth.

Days before a deeply divisive second round ballot between two candidates at opposite ends of the political spectrum, a government review confirmed what Peruvians had long suspected: the true number of Covid-19 deaths in the country was 180,764 – almost triple the official death toll of 69,342. The belated revision made Peru the country with the highest death rate per capita in the world.

Peru may have imposed one of the earliest and strictest lockdowns in Latin America back in March 2020, but high labour informality, overcrowded households and even shopping habits meant the measures failed to curtail infections. 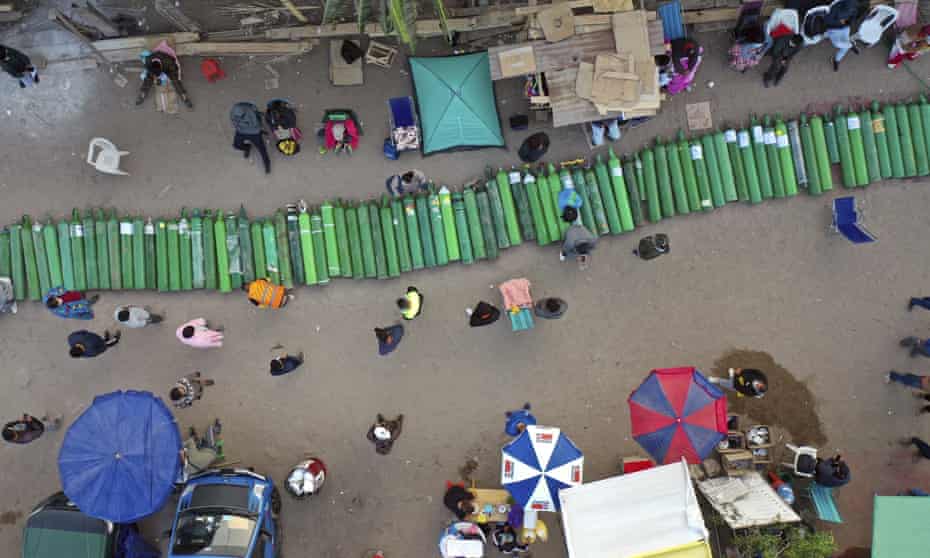 People line up their empty oxygen tanks outside of a shop while waiting for refills as Lima, Peru, suffers a shortage of medical oxygen. Photograph: Rodrigo Abd/AP

The vaccine rollout has been slow and the second wave of the virus was worse than the first, forcing Peru into another severe lockdown after a surge in infections that pushed hospitals to the edge of the collapse. Progress has also been scuppered by the political turmoil which saw three presidents in a week last year, and the situation wasn’t helped by the revelation in February that former leader Martín Vizcarra and nearly 500 others had been vaccinated in secret.

A caretaker government steered the vaccination drive back on track and about 2m Peruvians – 7% of the population – have now been fully vaccinated.

The death rate, which peaked in April, has slowly decreased but the grief and anger remain.

“The strange thing about this pandemic is that all the death has not sunk in,” said Patty Araújo. “Sometimes, I think we believe it’s all a bad dream.”

Jessica Ortigosa sees little prospect of a swift end to the nightmare as she waits for word on her father and wonders whether he’ll be able to swap his chair for a bed.

“This is how it is,” she said amid the cold and the tears and the embraces outside the Barrio Obrero general hospital. “It’s like this here every day. Every day.”