When an elderly couple with Covid-19 were admitted to her hospital’s intensive care unit, Laura Marie and her team made sure they were put in the same room.

“They were so sweet,” said the nurse, who works in the Canadian province of Alberta. “But they were so scared.”

The nursing staff in Edmonton cared for the pair as best they could, but their condition worsened and they were soon put on ventilators.

“They were so connected. Their vitals were the same. They had the same heartbeat,” she said.

Within days, the husband died from the virus. His wife was briefly woken from her medically-induced coma so she could hold his hand as he died.

Working on the frontline of Canada’s pandemic response, Marie is desperately aware of the consequences of resistance to public health measures. But as cases in her community surge, she has been frustrated to see growing pandemic fatigue, even as the death rate climbs.

“I worry that people are increasingly removed from these stories,” she said. “They don’t know what’s going to happen, until they might have to say goodbye to their mom or their dad.”

Infections are surging in Alberta, Saskatchewan and Manitoba, and exhausted healthcare workers say they are quickly nearing their breaking point.

But many residents of Canada’s Prairies – a vast and agriculturally rich part of the country – cast themselves as a people who prize individualism and personal responsibility ahead of collective action and government intervention. 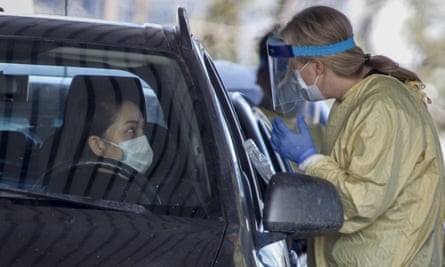 An Alberta health services employee speaks with a motorist at a drive-thru coronavirus testing facility in Calgary. Photograph: Jeff McIntosh/AP

In recent months, that idea has clashed against the bitter reality of the coronavirus pandemic.

When the first wave of the coronavirus hit Canada, it struck heavily populated Ontario and Quebec the hardest. Most of the cases – and more than 80% of deaths – were concentrated in those two provinces.

Now, Saskatchewan and Manitoba have some of the highest rates of infection in the country. And with 13,349 active cases, Alberta has surpassed far more populous provinces to become the centre for the second wave.

“It’s clear that we have reached a precarious point in Alberta. The virus is spreading faster and more widely than at any other point in the pandemic,” Dr Deena Hinshaw, the province’s chief medical officer, told reporters.

For some jurisdictions, the spring proved a valuable lesson in the effectiveness of lockdowns and the need for strict public health measures.

In contrast, officials in the Prairies took a more relaxed approach in the summer and fall, scaling back earlier restrictions and boasting to residents that the economy could successfully reopen. Such attitudes persisted even after more than 1,500 cases were logged at an Alberta meatpacking plant in the country’s worst single outbreak.

The surge in new infections has exposed the failures of that strategy – and provoked accusations that officials squandered valuable planning opportunities.

We had lots of time to prepare for the second wave. I just didn’t think this onslaught would be this bad

“We had lots of time to prepare for the second wave,” said Marie, whose name has been changed. (As a nurse in Alberta, she is an employee of the provincial health service and not authorized to speak publicly.)

“I just didn’t think this onslaught would be as bad as it’s bad right now.”

In some Edmonton and Calgary hospitals, intensive care units are at 90% capacity and cases continue to rise. The province has abandoned contract-tracing efforts and testing capacity is near its limits.

Matthew Douma, an emergency nurse and medical researcher in Edmonton, worries that staffing shortages and human exhaustion will put additional pressure on a strained system.

“A significant proportion of our staff are off because their kids are symptomatic, or they themselves are symptomatic and isolating. Prior to Covid-19, we already had a nursing shortage. Now, many of our departments are at capacity,” he said, adding that his views didn’t reflect the province’s health service.

Alberta’s ability to respond to the pandemic has also been hindered by cuts to social services and healthcare by the province’s conservative government, which has faced a steep economic downturn in recent years.

The outbreak in the Prairies mirrors a similar trend in rural American states such as Wyoming and South Dakota, where the virus has overcrowded healthcare systems.

For months, the Alberta government has touted “personal responsibility” as a key tool in its fight against the virus.

“I think there’s a bit of a rebellious and independent spirit to folks that live out here in the western provinces, and we have a conservative government to kind of reinforce that ideology,” said Douma.

On Tuesday evening, amid growing pressure from public health experts, the Alberta premier, Jason Kenney, announced a new set of restrictions, banning indoor social gatherings and partially shutting down schools. But restaurants, bars and places of worship will remain open.

While the Prairies have similar demographics to their southern American counterparts, key differences – including a public healthcare system and a refusal by leaders in the region to embrace conspiracy theories of the virus – have probably averted a far more dire outcome.

“We’ve certainly been more aggressive than the United States – especially with masks,” said Dr Anand Kumar, a Winnipeg-based infectious disease specialist and intensive care unit physician. “There are some places in the States where they just didn’t do anything, and those places are getting horrendous numbers.”

Right now, everybody’s apprehensive – not about the level that we’re at right now, but what’s coming around the corner

His province of Manitoba has the highest active case rate in the country: 634 infections per 100,000 residents – seven times higher than neighbouring Ontario. In the capital, Winnipeg, testing centres are recording positivity rates of 13%. In Steinbach, the site of a recent anti-mask protest, officials have logged 10-day positivity rates of 40%.

Even with new restrictions in place, Kumar doesn’t believe they go far enough to prevent an overload of the healthcare system.

“The higher the stress on the system, the less you can sustain it on an ongoing basis. Right now, everybody’s apprehensive – not about the level that we’re at right now, but what’s coming around the corner.”

Marie also cautions that the effects will be long lasting. Before the pandemic, she says, ICU nurses rarely got the chance to form personal relationships with patients suffering traumatic injuries or overdoses.

“Your heart still breaks for their loss, but you didn’t know them. But with these Covid patients, we’re talking to them, we’re trying to reassure them. And we’re trying to let them know we’re doing everything we can,” she said. “But those are just words. We don’t have the tools to save people. We can offer support, but we can’t cure them.

Zidane has no intention of resigning, Real Madrid will make a decision after the season (Marca)
Chiesa injured his ankle. He was replaced in the match against Napoli
Neuer on Bayern's two consecutive wins: This is a message to the competitors
Gattuso about 0:2 with Juve: Insigne should not think that Napoli lost because of him
Nepomnyashchy against reducing the RPL to 12 clubs: Russia is not ready to sacrifice a large number of fans
Wolverhampton loan Willian Jose from Sociedad with a buy-out option
AC Milan are close to loaning Tomori to Chelsea with a 20+ million euro buy-out option
Source https://www.theguardian.com/world/2020/nov/27/canada-prairies-coronavirus-alberta-saskatchewan-manitoba

Dundee's Jordan McGhee wants to take club 'back where they belong'

The day Jack Grealish became the toast of Newcastle

Worker defrauded company of £24,000 worth of goods to settle drugs debt

Newcastle has NOT vaccinated every care home resident

Ecogee continue to implement the free boiler and insulation scheme

Grants of up to £40,000 are available to County Durham businesses employing up to 250 people

The values that make world brighter