This week Euro 2020 bade farewell to eight of the 24 countries who had qualified and the eliminated teams were met by quite contrasting headlines back home. As in every tournament there were those who had exceeded expectations and those who had fallen way below them

One of the dark horses of the tournament, Turkey, had a horrible experience and were dumped out after three straight defeats. The press did not hold back. The sports newspaper Fanatik led with the headline “The End” and wrote that the “Turkish wall crumbled”. Another sports newspaper Fotomac kept it simple: “Disgrace” while in his Fanatik column, Mehmet Demirkol wrote: “The zero [points] we watched do not even deserve a zero. We witnessed a managerial disaster class.”

In Hungary there was quite a different sentiment after they came close to eliminating Germany. “Well done, boys” read the headline at Hungarian’s sports daily Nemzeti Sport and it was a sentiment reflected across the country. There was a mix of pride and admiration for the desire and quality Hungary showed for 270 minutes against some of Europe’s best and there is also real optimism from almost all quarters that Hungary can now build on this and make it to Qatar. András Schäfer and Attila Szalai were seen as the team’s shining lights, and add that to the return of Dominik Szoboszlai and the stewardship of Marco Rossi, whose status has risen to new heights, and there is hope that this tournament is only the start for this side.

There was approval too in Finland for the team’s efforts. Bearing in mind that the team went into the Euros as an underdog, the fact that they took three points and were narrowly eliminated was seen as a relatively tolerable result. The win against Denmark came in exceptional circumstances but still it was a win more than was expected. In fact having even a chance to qualify for the next round on the day of the final group fixtures brought joy for Finns. It was noticed that the talisman Teemu Pukki clearly was not at his best after an injury while Lukas Hradecky was seen as the best player. “The team concentrated on itself the whole time. It played against giants in the wisest of ways and didn’t try to go into a competition about ball possession or attacking,” wrote Janne Kosunen at Ilta-Sanomat.

Steve Clarke had taken Scotland to a major tournament but did not manage to get them out of the group. “Don’t leave it another 23 years, lads” urged the front page of the Scottish Sun. Therein lies the balancing act; praising Scotland for returning to a major finals in the first place versus the gnawing sense they could have had greater impact when there. The Scottish media displays stark contrast in attitudes. Some writers believe Scotland are not good enough to joust with Europe’s best, others are adamant Clarke’s players have underachieved. If Scotland do not qualify for the 2022 World Cup – and that already looks a stiff ask – general attitudes towards Clarke may well take a downturn. The country has been re-engaged with tournament football. 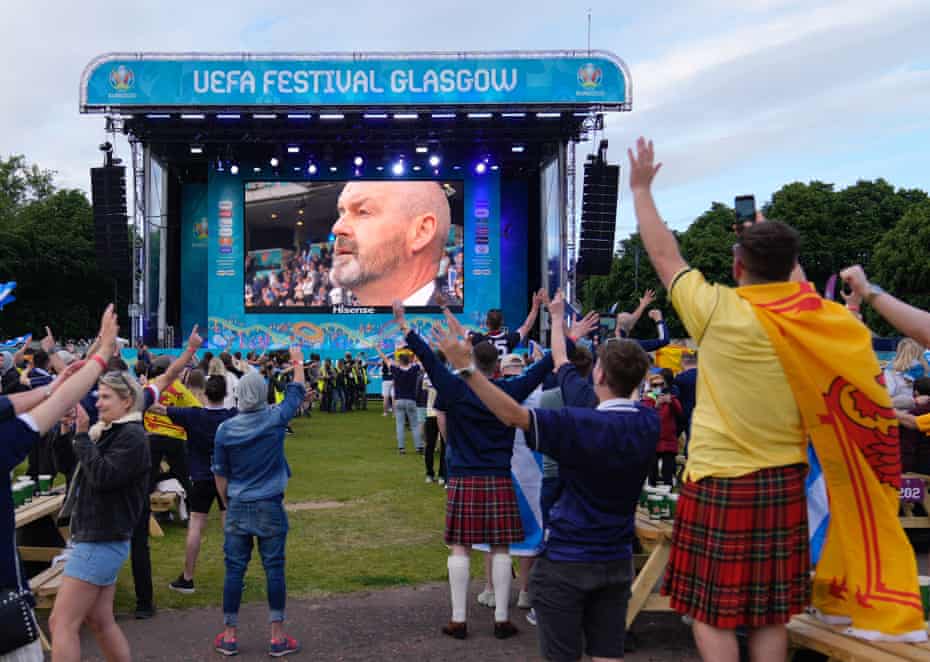 Fans at Glasgow’s official fan zone cheer when Steve Clarke appears on the giant screen during the defeat to Croatia, but will the goodwill remain if Scotland fail to qualify for the World Cup? Photograph: Stuart Wallace/BPI/Shutterstock

When the Poland players came back from St Petersburg after their defeat against Sweden it was the head of the FA, Zbigniew Boniek, who faced the press rather than the players. “What did we lack?” he asked himself “Football qualities most of all. I don’t think it was wrong to change the head coach in January and appoint Paulo Sousa. I don’t think I did it too late either.”

Having exonorated himself from any blame, he continued: “This hurt more than Russia [2018] because statistically we were better [against Slovakia and Sweden] but could not turn that into wins. We have to draw conclusions from this because I hope we can reach the next World Cup. Polish football needs it. Sousa has got a contract with the Polish FA until the end of qualifying. He is a very good coach and he turned the team around.”

It has been a few tough months for the Slovakia head coach, Stefan Tarkovic, as his side struggled in the World Cup qualifiers with draws against Cyprus and Malta and in the end were eliminated from the Euros after defeats against Sweden and Spain. The mood had brightened somewhat after the opening win against Poland but it soon reverted to a discussion about style. Overall supporters and the press were angry about the defensive set-up of the team in the three games. There has not been a call for drastic changes but there is a desire for a more attacking approach and there is a broad agreement that new, younger players are needed.