9 spiders you might see a lot more of in September

9 spiders you might see a lot more of in September

* WARNING - In case you hadn't already guessed yet, this story contains lots of pictures of spiders*

IT'S spider mating season and so you can expect to see a lot more of them in and around your house.

Experts say sightings if spiders often peak from September as males of many species reach adulthood and venture into homes in search of a mate.

But there's no need to be alarmed. Here's our guide to the nine spiders you're most likely to spot.

Easily identified from their small bodies (5mm or less, although their legs can be quite long) and their habit of hanging upside down under a sheet web.

More than 40% of Britain's spiders belong to this family, and they're not all the shiny black ones you might be thinking of.

Their webs are very often seen in shrubs or bushes, but they will also take up residence in the corners of houses, where at this time of year you can see the males doing their mating dance for the females.

These are big and a bit freaky looking. They are rarely found outside, and prefer to hang uspide down in their scruffy webs in the warm corners of your ceilings or cupboards.

They grow to 45mm (including legs) but they're harmless and they do eat a lot of other spiders, including some house spiders (see below).

So unless you really can't stand them, this one is worth leaving alone.

These are the biggest of Britain's spiders, with some reaching an overall size of 12cm. It's one of the only species to match a large body with large thick legs.

They spin very large webs that can last for years, often passing from generation to generation.

The webs were were reportedly used as bandages in the 1700s, while the spiders themselves were once eaten alive as a cure for a fever. We don't recommend that, but they're much less scary than they look.

These are often mistaken for false widow spiders, but are longer of body, with shorter and thicker legs. This spider comes indoors in the autumn to look for a mate or if it's rained a lot and their homes have been flooded.

If you're not sure if you've got a lace weaver or a false widow, look for a web  - the lace weaver's web is flat and intricate, and usually built over walls or other surfaces, with a central hole where the spider hides.

They're pretty mean looking, with a total length of 2cm and quite thick legs.

They do bite, but they're not aggressive and symptoms should consist of swelling for no more than 12 hours. 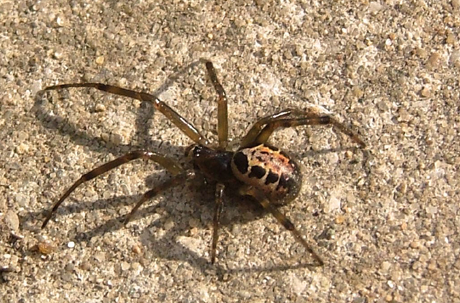 This is Steatoda Nobilis, the noble false widow. It's one of three false widow species in the UK, the largest - and the one mostly likely to come into your house.

It's been on the south coast for more than 150 years.

The British Arachnological Society says: "Everybody in the coastal counties of Southern England has had lots of them in their house and garden for many years, whether they have been aware of this or not."

The false widow is unlikely to bite you unless you sit on it or it gets trapped in your clothes.

Should you get bitten, it should be no more painful than a wasp sting, experts say - pointing out that many of those with spider bite horor stories did not see the creature that bit them.

If you don't want to take the risk, they are pretty slow moving, so they're easy to catch and remove from your house.

They are mostly found outdoors but they do like to lurk under washing machines, fridges and toilets.

Other types of false widow you might see are the rabbit hutch spider - much smaller and not known to bite - and the cupboard spider, which does bite, but not often. 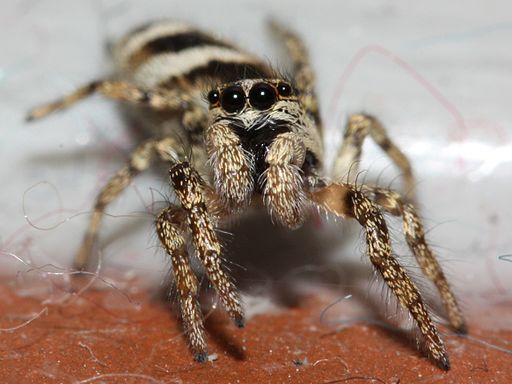 These tiny - 8mm- spiders are usually found in the garden but do occasionally make their way through open doors and windows at this time of year.

They're harmless, but if you're not expecting it their jump might alarm you. And their mating dance is something pretty special.

This is another spider often mis-identified as a false widow, but is easily distinguished because it spinds a circular web rather than the vertical scaffold-like strands of a false widow.

It's known as the missing sector weaver because it leaves a slice of its web unfinished. Perfectly harmless, but it might try building its web on the inside of your window instead of the outside.

And one you'll definitely see outside!

One of our biggest spiders, with a body size of up to 1.5cm, these are the spiders you see sitting in the middle of a perfectly constructed orb web.

They have a distinctive cross pattern on their backs They'll be around until the first frosts kill them off.

If you're lucky enough to get one on the outside of your windows you might get to watch it do this. (The speed they move when wrapping up flies and wasps is pretty impressive too.)

But I HATE spiders, what do I do?

Some say conkers in bowls by doors and windows will keep them out.

Some say a citrus based spray. Keep all your doors and windows closed and your house warm.

And check boots and shoes you haven't worn for a while, just in case...

Have you taken any amazing spider pictures?

Send us your amazing spider pictures

Send us your spider pictures by clicking here

Add your contribution now By uploading a contribution, for use online and in print, you accept our contributor terms. You will either own or have permission to use anything you provide.
Source https://www.wirralglobe.co.uk/news/17871793.9-spiders-might-see-lot-september/?ref=rss

'Dogfish' scam warning for people thinking of getting a puppy

Prince Harry hopes for calmer future, but not much chance

Men should be allowed to donate their sperm after death, experts suggest

Chelsea vs Arsenal live stream: How to watch Premier League fixture online and on TV tonight

Chelsea vs Arsenal prediction: How will Premier League fixture play out tonight?

Guardiola hits out at 'unsustainable' schedule as injuries mount

Man found dead in Wimbledon as temperatures plunge to -6C

Passengers scanned for coronavirus as plane lands on flights from China

Who is Rafael Nadal’s wife Xisca Perello, when did Australian Open star marry her, and do they have children?

What is coronavirus? Symptoms, types and is it contagious?

Roberta Flack: 'My music is my expression of what I feel in a moment'

Mental health charity gets on board with Lothian Buses

Stealing from nurses treating cancer patients to feed a heroin addiction... how much lower could a person go?

Australian Open 2020: Johanna Konta taking the positives despite first round exit to Ons Jabeur in Melbourne

Ruth Negga interview: 'I remember thinking, I'm going to embrace my difference, and I think maybe that fuelled my acting'

Cover one-fifth of UK in trees to save climate and revive wildlife, government told

Amanda Knox sparks outcry after posing in her prison uniform

Salaries for new teachers set to rise to £26,000 from September to tackle shortages

Will 2020 be the year abortion is banned in the US?

Oceans, biodiversity, deforestation: what's on the climate agenda for 2020?

10 surprising things you can find in a zero waste supermarket