CORONATION Street is set for another dramatic week and we have some new spoilers ready for you to sink your teeth into.

Britain's oldest soap has 13 storylines that will play out on screens from Monday and some of the show's popular characters are in for a very eventful week.

1. Daniel has a confession to make

Daniel's son Bertie was lying unconscious in his cot and when questioned about the rash found on Bertie's back, the widower is annoyed with himself for not noticing them sooner.

After hearing that the baby has caught measles, Daniel Osbourne will admit to both Peter and Bertie that he did not take his son back for the rest of his vaccinations.

2. Bethany offers Daniel a shoulder to cry on

After his blunder with Bertie, fans will see Beth give Daniel a hard time for putting his son's health at risk.

Beth makes him feel even worse by calling him out in front of everyone in The Rovers.

To matters worse, Daniel has had enough and pushes his family away before finding Bethany at Bertie's bedside.

Daniel thanks Bethany for being so supportive and will find out that she spent a night in the hospital with his baby boy.

Bethany's Mum Sarah will warn her not to get too close to Daniel, especially as they have shared a kiss before.

Beth makes it crystal clear that Bethany will never be a replacement for Daniel's wife Sinead Tinker who passed away after suffering from cancer.

Later in the week fans will see Daniel invite Bethany to his flat, which results in him moving in for a kiss and asking Bethany to stay with him.

Maria starts to feel unwell and will cancel her plans to visit Bristol with Gary to see his son Zack.

Pregnant Maria will still tell him to go and after she starts to feel dizzy at work, she finds out she is bleeding and asks doctor Ali for help who takes her to hospital.

Maria will be left in despair when the sonographer tells her that she has lost the baby.

A shocked Ali asked her more about her sickness and after finding out she has got the measles, he says that may be the reason why she lost the baby.

5. Gary and Maria try to come to terms with their loss

Fans will see Ali do his best to comfort Maria after she finds out she has had a miscarriage.

This will bring back sad memories for the hair stylist who lost her son Paul back in 2008.

She'll tell doctor Ali that she can't face the thought of having to go through the grief and pain of losing a child all over again.

Gary will return from Bristol and Maria is left with no choice but to tell Gary the bad news.

He tries to console her and it will soon become clear to fans that she is blaming himself for the loss.

6. Gary takes his anger out on Daniel

Later in the week Corrie fans will see the conformation of Maria getting diagnosed with measles and she will also find out from her mum that she was never vaccinated as a child.

Hair salon owner Audrey puts everything together and tells Maria that she caught the illness from baby Bertie.

Maria is shocked to find out that Daniel did not get Bertie vaccinated.

Gary is furious after hearing the news and he viewers will see him take his anger out on Daniel and blame him for Maria's miscarriage.

7. Tim tries to get rid of Charlie

This week we saw Tim's secret husband Charlie make her way to Weatherfield and demand £5,000 from him, otherwise she will not sign the divorce papers.

After Charlie reveals she will living at The Rovers, Tim asks his mate Abi to help him get rid of her.

He will try and execute a plan to make his secret wife feel like she can do better than working in The Rovers and she will let everyone know she has a job in Gatwick Airport.

Tim is still not at ease though as he believes Charlie will try and leave before she signs the divorce papers.

8. Charlie stuns Tim with a proposal

Things will continue to get worse for the taxi firm co-owner next week as Charlie wants to stick around for the foreseeable future.

Tim will continue to ask Charlie to sign the divorce papers, but she will draw out the process even further by telling Tim that it will take a few more days.

He will be in for the shock of his life when Charlie explains the reason why she has not signed the papers is because she wants to make a go of their marriage and proposes to him.

9. Tim's (still) in the doghouse with Sally

Not that Tim ever left the doghouse once he told his second wife Sally about his previous marriage, but things are looking bleak for him as a returning Sally feels humiliated after finding out it it's not just her that knows Tim is a bigamist.

Next week Tim will call the police and confess everything thinking he is making up for his mistakes, but it has only made things worse for Sally.

Geoff continues to hammer home that his wife Yasmeen has a drink problem in his latest effort to control her, but her granddaughter Alya is starting to see through his evil ways.

Fans will see her try to convince her grandmother that she is not addicted to alcohol.

But Geoff will continue to destroy Yasmeen's confidence and she will take Peter's offer to go with him to an alcoholic support group.

Viewers will see Geoff seething after Yasmeen remarked he is a bit rusty after Michael hired him to perform some tricks at his baby daughter Tiana's birthday party.

When she returns from the meeting with Peter, Yasmeen is more certain than ever that she does not have a drinking problem.

Scared he was starting to lose his power and control over his wife, Geoff's cruel ways will go up another level when Corrie lovers will see him order Yasmeen to drink a bottle of wine.

Peter will check in on Yasmeen later and is shocked to hear Geoff say the meeting caused Yasmeen to relapse.

Fans have seen Gemma and Chesney struggle to look after their four babies ever since they went home with them and next we see mother Gemma reach the end of her tether.

Whilst the couple are on a walk, loyal followers of the soap will see Gemma tell Ches that she doesn't feel confident about her post-pregnancy body.

As they continue to chat a bus goes past with their Freshco campaign on the side, which does not feature them.

Gemma feels terrible after realising they were photo-shopped out of the advert. 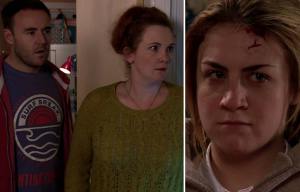 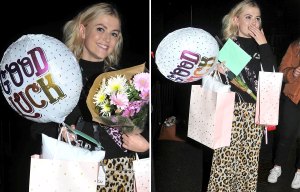 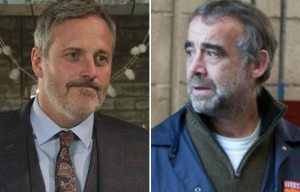 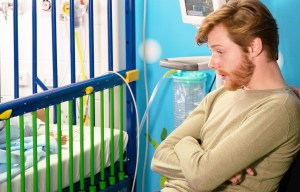 Viewers will see a livid Gemma lose it at Tara from Freshco and after speaking to lawyer Imran for legal advice, he will tell her that the contract is watertight and that there is nothing they can do.

Gemma takes matters into her own hands and fans will see her on a mission to try to vandalise the posters, but Chesney will manage to stop her.

She feels terrible and begins to think she is not good enough for babies, but will Chesney be able to change her mind?

Coronation Street’s Lucy Fallon cries into her pizza after an emotional day filming as Bethany Platt for the last time
Source https://www.thesun.co.uk/tvandshowbiz/10813451/coronation-street-spoilers-next-week-bethany-daniel-kiss/