Close icon Two crossed lines that form an 'X'. It indicates a way to close an interaction, or dismiss a notification. 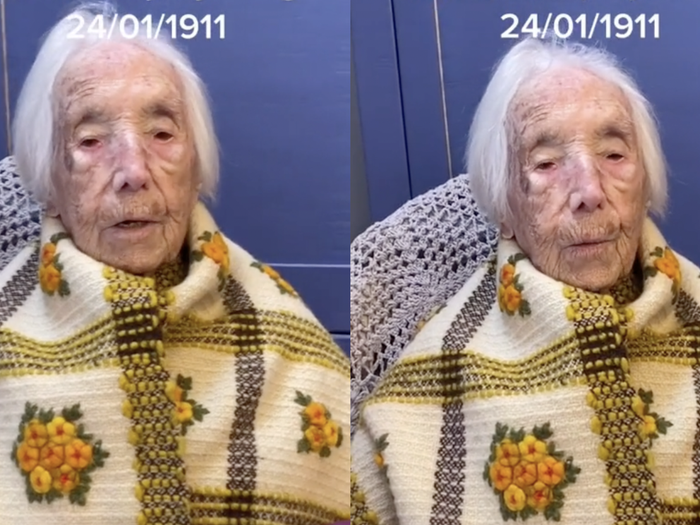 A 110-year-old TikTok star who was reportedly the oldest woman in Wales has died.

Amy Winifred Hawkins went viral on TikTok with a video that showed her performing a rendition of the 1912 Jack Judge song "It's A Long Way to Tipperary" while holding a cup of tea to celebrate her 110th birthday on January 24.

She died on Thursday at the Ysbyty Ystrad Fawr hospital in Ystrad Mynach, a town in the county borough of Caerphilly, soon after testing positive for COVID-19, according to the Welsh outlet WalesOnline.

The TikTok, which was posted by Hawkins' great-grandson Sacha Freeman under the handle @sachafreeman0, has over 150,000 views and 35,000 likes, with many comments applauding the elder's effort and admiring her for living such a long life.

Due to COVID-19, Hawkins could not do her usual birthday ritual of going to a local pub and receiving loads of gifts, so she celebrated with her family by relaxing at home and singing old tunes, which led to the creation of the viral TikTok, according to ITV News.

After the first clip gained traction, Freeman posted several other videos featuring Hawkins, including one in which the supercentenarian sang Mark Sheridan's "Who Were You With Last Night" and another where she covered the music hall song "Take Me Back to Dear Old Blighty."

Freeman's most recent TikTok, posted in early February, showed Hawkins covering a tune that appeared to be in Welsh.

Hawkins was born in 1911 in Cardiff but lived in Monmouth, Wales, with four generations of family members, according to the BBC. She was the oldest woman in the country, the BBC reported.

The TikTok microcelebrity worked as a window dresser and later a fire-watcher during World War II, and spent much of her life in the Welsh city of Newport until her husband, George Hawkins, died in 1996, according to the British outlet Express.

The woman's great-grandson Freeman said Hawkins "didn't really understand the concept of TikTok at first. I had to tell her it was 'on the computer' and could be seen by people all over the world," reported ITV News.

Hawkins' daughter, Rozi Hawkins, told WalesOnline that Amy "was lovely and she just cared about other people really more than herself."

The Monmouth city government and the Ysbyty Ystrad Fawr hospital did not respond to requests for comment.

Sign up for notifications from Insider! Stay up to date with what you want to know.

Chevron icon It indicates an expandable section or menu, or sometimes previous / next navigation options.

Vinicius was racially abused during the match with Barca. La Liga will inform the prosecutor's office
Kristoffer Ayer: According to the level of Liverpool's attack, it seems as if they don't notice some of the opponent's players
In Barca, they are dissatisfied with the game of Pique, Alba and Busquets. Some players may be sold after Koeman's dismissal
Messi and Mbappe missed PSG training before the match with Lille
Merson on Sulscher: Anyone else would have been fired by now. He is as lucky as a coach can be
Ancelotti on Koeman's dismissal: It's part of our job. This has happened to me many times
Barcelona wants to get rid of Luc de Jong in the winter. They don't count on him after Koeman's dismissal

A history of Halloween: facing our own mortality at the heart of the celebration

Universal Credit: What the average family will lose from changes in the 2021 Budget

West Lothian Council staff could strike in dispute over pay

The 9 best suitcases for every budget

Strathaven club have a ball on Return to Rugby weekend

Tax bills across the UK to soar by £3,000 thanks to Tory budget, warn experts

What channel is Celtic vs Livingston? Live stream, TV and kick off details for the Premiership clash at Parkhead

How legumes offer a solution to rising input costs

Farmer died after being hit by JCB bucket, inquest hears

Rail strikes which could have crippled COP26 are called off

I found out my boyfriend cheated with five women the day before his funeral, I’ve had so much therapy to deal with it

"It's important we look out for each other": Public step in after man tries to drag woman behind building

What was Huey Haha’s real name?